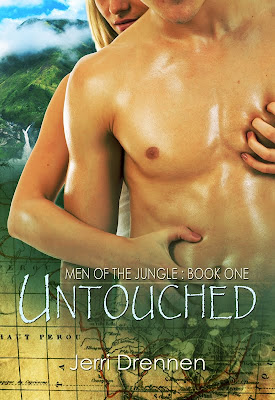 BLURB - Botanist Madeline Wentworth is relieved to be heading into the Amazon, far from the university and the vicious rumors circulating about her failed love affair. But on arriving in Peru, her team finds their guide dead with a small puncture wound to his neck. Waiting to replace him is Travis Kane, Amazon guide, treasure hunter, and superhunk. Mattie is instantly attracted but uncomfortably suspicious. When a member of her team falls ill and a similar puncture wound is found on his body, her suspicions deepen.

Travis has stuck with being a jungle guide for over ten years despite a run of unsavory clients. The rain forest is full of hidden ruins and undiscovered treasure, and he’s determined to find his share. But when his grandfather dies, leaving a letter boasting of Templar gold, he’s sure it's nothing more than an old man’s delusion. Everything changes when he finds his grandfather’s map. With high hopes, he leads Mattie’s team into the rain forest and finds himself overwhelmed by the beautiful blonde. When the group is attacked and has to fight its way out of the jungle, Travis discovers something more precious than gold--the love of a woman who’s made him want to be a better man.


Excerpt - “Dr. Wentworth?” a deep, compelling voice asked.
Mattie looked up. “Yes,” was all she could muster, spellbound by the pair of striking, brandy-colored eyes of a tall, well-built man standing before her.
She swallowed to clear her throat.
“I was told that you might need a guide.” He reached into his shirt pocket and pulled out a folded slip of paper. “Here are my credentials. I’ve been a wilderness guide for over ten years, and I know the area.”
Uncharacteristically, Mattie found herself tongue-tied. She had never seen such a gorgeous man in her life. His hair was a rich chocolate brown, cut short on the sides, slightly longer on top. His nose was straight and his features were perfectly proportioned. His lips were strong, firm, and the color of deep Mediterranean coral. From the stubble on his chin, it looked as if he hadn’t shaven in a few days. The effect gave him a rugged, outdoorsy appeal. The only thing less than perfect on the man was a thin, white scar running from his nose to his lip. She wondered how he’d gotten it. An occupational hazard perhaps?
To fight the urge to sigh, she unfolded the paper and studied his certifications. The résumé was impressive if it was on the up-and-up. “You know this area well then, Mr., ah...” She scanned the sheet of paper, then returned her attention to him. “Kane.”
He nodded.
His eyes mesmerized Mattie. She blinked and hauled her mind back on track. “Do you think you could be ready to leave later this afternoon? We want to get started right away cataloging plants. We’ve been prepared since we arrived four days ago. The guide we’d originally commissioned died the day we landed in Manu.”
His arched brows drew together. “I’d need to get my own supplies rounded up, but I could probably be ready by then. Could you tell me the name of the guide who died?”
“Yes, he was a local man. Chaz Juntas.”
Pain crossed his features.
“You knew him?”
“Yes. He was a good man. We’d gone into the Amazon a number of times together.”
“I’m sorry.” Mattie looked down at her cup, noting her shaky hands. Was it the reaction to Travis Kane or was the dream still working on her nerves?
“Have you rented trucks for the trip yet?” His question had her glancing back at him. “If not, I could see what I can do. How many are in your party?”
“Six altogether. Two men and four women.”
His eyes narrowed. “Four women?”
“Yes. Is that a problem?” Was the guy a chauvinist?
He inhaled, then shook his head. “No, no problem. What about the trucks? Have you got them lined up then?”
“Yes. The supplies are already loaded too. Chaz had arranged it all before we’d arrived.”
“Where are they now?”
“At the edge of town. The authorities have been keeping an eye on them to make sure nothing is stolen.”
“I’ll meet you there around two o’clock. Be ready to move out immediately. I want to get a few hours’ travel in before we need to set up camp.”
“We’ll be ready, Mr. Kane.”
He turned and walked away.
Mattie sighed.
Had she been too quick to hire him? Had the man’s qualifications won her over or did his looks and physique have her practically begging him to guide them? She wasn’t sure--and even if she were, she didn’t care. They had a sober guide who didn't give her the creeps and that was all that mattered right now.

To end the torture of unknowning and find out what happens next, click here to purchase a copy.