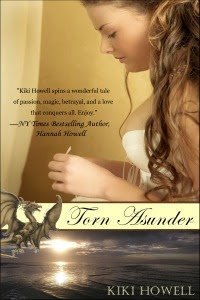 BLURB - Aubrey Griffen is a witch whose true reasons for coming to soon fall to the wayside when she catches the eye of Edmund Bryant, the Marquess of Dalysbury. He seduces her into a whirlwind romance until the lies and threats of his mother force her to flee to Triaill Brimuir, a secret island of her ancestors off the coast of . Edmund goes after her only to be hit by Aubrey’s confusion and anger when she magically transforms him into an elemental beast of her own creation.

However, it is when Edmund’s lust mysteriously turns him back into a man that the couple are forced to deal with a family secret and untold of powers. Now, Edmund must learn to shift himself into the beast in order to save her in a battle of black verses white magic.

Fraught with scenes of explicit intimacy, romantic spells and mystical shapeshifting, Torn Asunder is a unique blending of the age of manners with sexual magic.

EXCERPT - She had known from the beginning their time was fleeting. She had reminded herself they could share no future, could never make it work when she possessed a secret of even greater offense than her reduced circumstance. If found to be a witch, society would feel obliged to be cruel even though the witch craze in was over. Therefore, she had kept her secret to herself. Although he had gained inklings of something being amiss from time to time, she had always found a way to keep him in the dark.

“Here, maybe you will find comfort in the message which came with the roses. I had forgotten to give it to you, with you and Lady Sanderly in such a state after Lady Dalysbury’s visit. Please forgive me, Miss.”

Forcing her hand steady, she gained hold of the envelope. Fully baked, she tried to find comfort in the words scrawled on a piece of writing paper.

I must go posthaste to meet the Earl of Glouchester. I feel it suits my purposes to give this man’s proposals due consideration. I am besieged by thoughts of your beauty and will count the days until I can return to Dalysbury and secret away to hold you to me again.

She went through the charade of showing the note to have made her much improved just to get Sarah to leave her be. Knowing the woman felt guilty for forgetting the letter, she had tried to reassure her, but she hadn’t the fortitude to deal with it fully. She wanted to be alone again, to shed the blatant pretense which was such an effort. Arranging the stems was a momentary reprieve from the truth, though it came at a high price.

“All better now, child?” Sarah asked. Aubrey tried hard not to cave once again under the woman’s gentle touch.

“Yes, you are a dear, Sarah. What would I do without your guidance and support?”

“I must get back to my chores, then.”

Aubrey noticed the heat which had risen to the maid’s cheeks as she ignored the flattery. A thespian she could not a moment longer be. When her door closed, she found her throat tightening. She needed large gulps of air to issue her ensuing sobs. Her fists clenched together and pushed against the sharp pains in her chest as she found she was too lethargic to make herself even dream upon her chances with Edmund anymore. It all fit with her groundless manner in the hours since Lady Dalysbury had come to call upon her. She questioned every emotion she felt, every rash thought that popped into her head, and every movement she made. Even her deliberations were sporadic and opposing. from believing at least in the love they had shared, to heeding the threats of his mother, to wishing she had never laid eyes upon either of them.

She had known a day like this would come when she would have to leave him, but today seemed too soon. Dreams have a way of keeping hopes alive, even the impossible ones. So, once crushed completely, it still seems a crushing loss.

Turning in on herself, she braced the weight of her body with stiff arms upon the table. As she hung her head over the glass, holding the nearly completed arrangement, the tips of the flowers tickled her forehead. She did not react to the gentle caress of nature as she once would have. A tear dripped onto a petal and made its way to the center of the flower.

Aubrey forced air deep into her lungs. She raised herself up out of an obligation to finish something she had started. Once the final flower fell in among the greenery, the image of him taunted her. A dizzying amount of air expelled from her lungs.
Want more? Then follow these buy links: Amazon, Excessica Publishing
Thanks for reading! Be sure to check out Thursday's excerpt for more reading material and next week for my next romantic suspense guest!
Elaina
Posted by Elaina Lee at 1/18/2011 07:30:00 AM