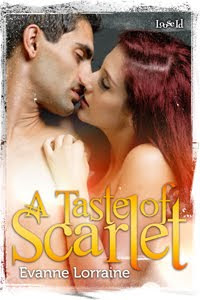 May I introduce to you an author that will leave you begging for more after just one sentence. You think I kid? Try and stop reading... ;-)
Book Specifics -
Genre - Paranormal romance
Length - Novella
Heat Level - Erotic
Sexual Orientation - M/F
Content Warning -
BLURB - A rare Omega wolf with the gift of healing, Scarlet underwent her first shift to werewolf form while held captive by a pack of rogue Alphas. The abuse shattered her connection with her inner bitch and left her with a severe Alpha-phobia. A broken wolf link put her out of the mating game. But determined to serve a pack in need of her healing, she searches for the legendary werewolf whisperer on the chance he can work the miracle she needs.

Once he roamed North America guiding the broken wolves back to wholeness, but Daniel nearly lost his humanity the last time he tracked a rogue. Escaping from the whisperer business, he spent months in his true werewolf form. Now he’s the lone wolf sheriff in sleepy Cedar Grove. He likes peace and quiet in his territory, same as any good law officer, and the new redhead in town is pure trouble.

Two seconds after they meet, she's disturbing the hell out of his peace. She’s a pack princess and he's not interested in a pack sanctioned mating. Been there, done that, and still paying through the nose for the mistake. Leaving her alone is the right choice, but he can't deny that she smells delicious.

Red crossed into the living room and stopped, facing the portrait of Charlie and Myrna that hung over the couch. Her face smoothed into a slow, sweet smile. Without her normal glare, her beauty made Daniel’s breath catch.

He had to clear his throat before he said, “Where do you want this?”

She reached for the grocery bag. “I’ll take it.”

He let her have the sack. “Want me to start a fire?”

“That’d be lovely, but there’s no wood.”

“I’ll handle it,” he said with plenty of casual manliness and headed back outside to the woodpile. A stack of dry splits greeted him. There were even a couple of neatly tied kindling bundles. Nice to see Harrison did something around the place besides brew and guzzle his hooch.

In no time, he had a crackling fire going and wandered back toward the kitchen.

“Would you like something to eat or a drink?” she asked politely.

Her own wild fragrance still held a tang of fear. The damn near irresistible combination of sweet, wild, and scared was enough to make earning her trust a challenge. He reminded himself he was out of the wolf guide business. Healing them was great. The problem came when they were too far gone to recover their humanity.

He shook off the grim thoughts like water off his fur. None of that applied to Red anyway. Only males lost their human connection and went rogue. Badly damaged females died. And Red was rock-solid grounded in human. Maybe too human…

Nothing he needed to worry about. Flirting with a pretty female was something even an old lone wolf could enjoy.

“What’ve you got?” He peered inside the bag still parked on the counter and then hauled out the giant economy bottle of chocolate sauce. “Planning a little splurge?”

“As you see, there’s ice cream, chocolate syrup, Nutella, apples, cream, eggs, bacon, and bread. I also have diet cola, water, an assortment of canned food, and stale crackers.” She paused to take a breath after rattling off the list. “Now, what would you like?”

He was fairly certain her delicious body wasn’t on the menu. “No meat?”

“Just the bacon and some Spam.”

“I’ll have whatever you’re fixing.” He settled himself back in the doorway, leaning against the frame where he could protect her from anyone other than himself.

Unreasonably pleased with himself for covering the room’s only access point, he stood guard as she washed and dried two of the succulent apples, hauled out a cutting board and a chef’s knife, and got busy.

With deft moves, she cut the fruit, arranging the slices like the spokes of a fancy wheel in two bowls. Every now and then she paused to take a deep breath, and the tang of her fear lessened. Each helping got a generous dollop of Nutella, which looked a lot like chocolate frosting, in the center of the apple slices. Then she sprayed the cutting board with something lemony, wiped it down, and stashed the used utensils in the dishwasher.

At last she turned, and her wide, wanting eyes fixed on him. His wolf circled and shoved hard, pushing Daniel closer.

Then he made a big mistake.

For just a second, he let go of his self-control and simply inhaled her wild berry essence. A musky arousal blended with her sweetness. Absolutely delicious.

Only one thought survived the intoxication of her nearness -- a hope she’d take pity on him and touch him, anywhere. Maybe if he was really lucky, her lips would be involved.

He stood still as a rock, waiting and aching.

She dropped her gaze and shivered. Unable to stop, he held out a hand, hoping for impossible. Instinctively he knew the first move belonged to Scarlet.

Want more? Follow this Buy link for A Taste of Scarlet by Evanne Lorraine

Thanks for reading! Be sure to check out my All Things Romantic Suspense event happening every Monday and Tuesday and each Thursday for another excerpt from the best writers in the e-industry. ;-)

Email ThisBlogThis!Share to TwitterShare to FacebookShare to Pinterest
Labels: A Taste of Scarlett Excerpt, Evanne Lorraine