All Things Romantic Suspense - Sarah Ballance - Run to You 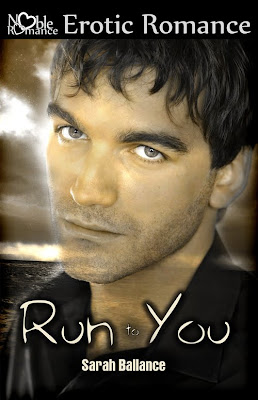 Mattie James can't pinpoint exactly when she lost control of her life, but the moment she decided to take it back made the front page of the local paper. Desperate to dodge the fallout— and the tabloids—she jumps at the chance to spend an off-season week in a tiny resort community by the sea. Making the trip with her ex-lover is a complication she can live with; coming face to face with a dead woman is not.

The last thing Sheriff Wyatt Reed expected to find on the storm-ravaged beach was a beautiful blonde with a jealous sidekick, but one look at Mattie left him wanting more. Their first date takes an ominous turn when he gets the call that a woman was found murdered. With a killer on the loose and a troubling lack of suspects or motive, Wyatt has to put his feelings aside to focus on the case. But his vow not to become personally involved is shattered when he discovers Mattie's life is on the line, and this time the truth leaves her with a deadly choice . . . and nowhere to run.

He lowered her to the bed, and she ached for his touch, longed for him to unleash the most reckless of her desires, but all she got was the light play of his fingers against her bare skin. The phantom graze of his roughened hand against the tight peaks of her breasts left her dizzy, moaning his name, futilely pressing her need against the rough denim of his jeans where their bodies met. Then his mouth followed his fingers, hot and wet, and an explosion of sensation shot through her, taking the last of her control in a firestorm of beautiful, utter surrender.

Somewhere in the background, the ocean whispered threats, but they were lost to another sort of peril—that of being taken, whisked away, left in a wilderness of untamed emotion brought on by the way he breathed need into her with every amazing kiss. And Mattie went willingly, careening through the space that belonged to them, through darkness and light and the unexplored depths of feelings she hadn’t known she had the capacity for.

While she drifted, he stood, and there was just enough light for her to know his eyes never left her as he freed himself of his jeans. Only a madman could look at her so calmly, so unaffected, while she lay trembling, caught between anticipation and recovery, swimming in the troubled waters of giving and taking and letting go.
But then he sank against her, pushed into her, and what must have been the last of his restraints fell when she rocked her hips to meet him. He froze.

"Damn you," he muttered, pressing hot kisses along the path of his words, from the spot where his breath grazed her neck to the sensitive hollow of her ear. "I’m not going to last a second with you doing that."

"Then don’t," she whispered.

He dropped his head, laughing, and took her aching breast in his mouth to coil his tongue around the peak.

Mattie shook with his intensity. She lifted to him, higher, tighter, so every nerve ending begged for him. And with agonizing leisure, he obliged, burying himself inside, stretching and filling her so his retreat left her desperate for his mercy.
He didn’t give it.

She offered her body willingly, but she hadn’t been prepared for him to take her soul along with it. She fought the sensation of drowning in the man, of the sweet torture of losing herself in a kind of physical love she’d never known. But his hands caressed in all the right places—strong at her hip when he pushed deep inside her, gentle when he touched her cheek and cradled her face.

Even though he lingered, teasing, moving so slowly inside her she struggled to believe it was real, the pleasure shot through her, building at a speed that far exceeded the cadence of their bodies. Nothing so incredible had ever existed, not ever.

"Wyatt." A shaky whisper, an urgency. A man threatening to take her hostage with a trace of kisses down her neck and the utter possession of her body.

His eyes met hers, and she lived her entire life in that moment. Vaguely aware she’d blown the concept of a fling all to hell, she wrapped herself around him and held on while he took them both over the edge, careening, to a place she couldn’t have dreamed existed—a place of belonging, one she had no business finding in his arms.

Mattie didn’t bother with second thoughts, or even thirds, if there was such a thing. But lying there in the aftermath, drifting, reeling, she stared at the deep cuts that ran the length of his forearms as he traced the line of her hip with a fingertip, and her instincts of self-preservation kicked in.

"What have you done to me, Wyatt Reed?" The words were barely a whisper above the noise of the storm.

He didn’t respond—he probably hadn’t heard her—but the answer lingered in the air between them anyway, hot and heavy, full of a promise she couldn’t make. Something she’d ignore until the day she walked out of his life, and, she decided, to hell with the consequences until then.

To find out what happens next and read the entire book, follow these buy links - Noble Romance or Amazon

Thanks for stopping by and reading, hope you enjoyed!

Email ThisBlogThis!Share to TwitterShare to FacebookShare to Pinterest
Labels: Run to You, Run to You excerpt, Sarah Ballance