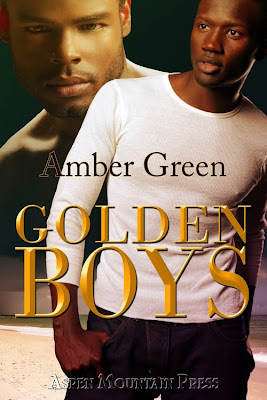 I'm so excited to be able to bring you an Amber Green excerpt today! If you enjoy M/M romance and haven't had the pleasure (oh, the real pleasure) of reading one of her novels, you are truly missing out. A rabid fan of her hidden M/F work, I can assure you, this woman can write! So please, take a moment to check out her excerpt.
Book Specifics -
Genre - Romantic Suspense
Length - Novella (21k)
Heat Level - 4 (erotic)
Sexual Orientation - M/M
Content Warning - Violence
BLURB -
With his easy laugh and knowing eyes, Jell grew up street--while I was raised to be a pillar of society. Now we're half naked and escaping a psychiatric facility. We're lost, cold, and being shot at. And did I mention half naked?
EXCERPT -

After the third round of compliments on the food, Uncle Ron pushed back his chair. He'd watched me fidget all through the meal. At least he was wearing his normal glass eye, not the one with the topaz iris. He glanced at my dad, who nodded fractionally.

Ron folded his napkin. He's actually a cousin, not that it matters in a family like mine.

Aunt Honey sipped her tea. "Dido and I will sit and visit, if nobody minds. Do you roast your peppers or broil them?"

Their car was a pristine Civic, newest in a long line of them. I remembered the Thanksgiving when I turned five, slapping muddy handprints all over their new car. How was I to know the sandy mud would scratch the paint, or what paint cost?

Ron spoke as if to the windshield. "You know Jelly Richardson, don't you?"

I blinked, utterly disoriented. Then defensive. Then cautious. What was the safest thing to say? What he's likely to already know, of course.

I spoke to the windshield too. "We went to high school together. He even lived with us for several weeks, until Mom decided he might be a bad influence. Too street."

They'd packed him off while I attended a science club dinner. Didn't warn me or let me explain--but what could I have said? When I'd cornered him at school the next morning, he'd brushed off my stammers with a laugh and an invitation to bump elbows and fists.

After that, any time I was seen with Jell, or reportedly seen with him, I'd get the lecture on resisting the lure of the street culture.

But he'd had a flair, a magnetism. Him with his ready wit, his knack for wordplay, his bright bronze skin, baby dreads, oversized clothes, and birthmark like flowing purple tears. Him with the promise of forbidden knowledge in his eyes.

Ron hmphed, touched his turn signal, and shook his head at someone passing. "You know he's now T-Jell?"

Of course I did. He was a rising star in the rap world, which nobody in my family could possibly know anything about. Too street. He was also, though nobody was supposed to know it, ensconced in a detox program south of here, an upscale version of the county-run program I'd just landed a job with. My center was abuzz with the news.

Was that where this conversation was going? "I see him on Internet posters, here and there."

Ron nodded. "He's currently hiding out in a mental health facility between here and St. Augustine. I need you to do me a favor, if you see fit. I need you to go in there, contact him, and lure him out to come talk to me."

How do you expect me to do that? "Why would you want someone to leave detox before he's detoxed?"

Ron looked at me a second, then cut his gaze back to the traffic. "He's clean, or as clean as half my agents. We checked a hair sample; he hasn't had anything but alcohol and weed for the past couple of years."

I couldn't resist the family's canned wisdom. "Alcohol and marijuana contribute heavily to the street culture."

His eyes flicked at me. Was that amusement? "Those are not his problems. His problem is he knows too much about something. My problem is insatiable curiosity. I want to know what he knows, and I want to know it as soon as possible. Unfortunately, certain persons, including his girlfriend's drug-dealing sister, want to keep him from talking to me. So he's admitted himself for a twenty-eight-day inpatient program, knowing his information could quickly become too stale to use."

"You want to coerce a rapper to narc? Won't that blow his street cred? I mean-"

"Get real, kid. He initially contacted me. Rather, he contacted the local office and asked how to contact me. Nobody with any degree of street cred comes to the FBI over a few ounces of pot or a handful of pills. Something shocked your friend badly enough to bring him to us, and then something scared him away. I want to know what it is. I sent in a nurse of ours, but he won't talk to her, much less leave with her."

"But you think he'll leave with me?"

He checked the rearview mirror, hit his turn signal, and switched lanes with meticulously precise movements. "I do, particularly in light of your Monday bombshell."

I stared out the windshield. We were crossing a bridge and everyone out there wanted to go faster than Uncle Ron.

"Because I'm gay?" The word tasted odd, and sounded high-pitched. I needed to practice saying it out loud. "Why would that lure Jell? He's got a girlfriend, remember?"

He's famous enough to have all kinds of people crawling up to him, if he showed the slightest interest in any of them. And that was on top of him being his own fascinating self.

I'd nearly blown my straight-A average in tenth grade, when he sat between me and the board in three classes. I couldn't escape seeing his profile and tidy ear one minute, his cheekbone and the muscles of his neck the next. How many times had I tried to draw the curves of his lip, his eyebrow, or that beautiful ear in the margin of my notebook, and then covered the lines with doodles before anyone could see?

Ron checked his mirror again. "No, Ethan. We found sketches of you in his diary, and what could be construed as love poems dating back to high school."

I saw Jell's intense eyes, the left one purple-accented, watching me at the boys' room urinal, me with my dick thickening as I hurriedly stuffed it back into my pants. How often had that happened? Every couple of weeks, at least. I'd sought him out, hoping the meetings looked casual or even accidental. And sometimes he'd simply appeared near me. How often had that been happenstance or coincidence?

Why is the FBI reading Jell Richardson's diary?

Want more? Follow these buy links to check out the rest of the story - Aspen Mountain Press or Amazon

Thanks so much for stopping by and check out Amber's story!