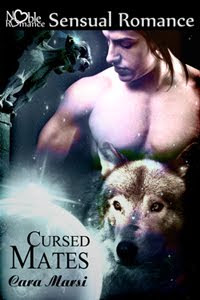 For this weeks Excerpt Thursday, I'd like to introduce you to a seductive and suspense filled novel by, Cara Marsi, titled, Cursed Mates. Enjoy!
Book Specifics -
Genre- Paranormal Romance, Shape-shifting romance
Length- 79k (novel)
Heat Level- Sensual/Spicy
Sexual Orientation- M/F
Content Warnings-
BLURB-
Nick Radford is a reluctant werewolf who's been fighting the Beast within for nearly 500 years. He's never killed a human, but the Beast is gaining strength and Nick may not be able to ward off his inner demon much longer.

Kyla Yaeger is an elite were-hunter with a scarred past. Her life's mission is to slay the werewolves that slaughtered her parents. Her quest has brought her to Maine, where she's been summoned to destroy the werewolf terrorizing the quaint little village of Heavensent. The last thing she needs is to get distracted by her mysterious—not to mention hunky—new neighbor, Nick Radford.

By the time Kyla learns Nick is her target, she's already fallen for him, making her task of killing him that much harder. She is torn between her love for him and her duty to kill her sworn enemy. Nick fights his forbidden love for Kyla, knowing she is duty-bound to kill him. Kyla and Nick must join forces to fight an even bigger threat—one that will destroy all humanity. Only by their combined powers, can they destroy the evil and bring an end to a centuries old curse.
EXCERPT-
Prologue
England, the outskirts of York, 1530
The ancient witch began her chant. They were sacred words, passed from mother to daughter through the centuries since men had claimed this mystic ground. Her song vibrated through the small hut as the smell of burning peat filled her nostrils, and the iciness of the winter night burned her skin.
"Wood spirits, come to me, I beg. Hear the plea of your servant. Help me take my lord's pain as my own." Wisps of blue smoke curled around her, changing solid walls into mere shadows.
Without warning, a sharp blade of pain shot through her veins. She welcomed it, had begged for it. His pain. Nicholas Radford. Her liege lord. Her body convulsed, and she cried out.
She lay over him and closed her eyes. "I beg you, mighty powers, keep my master from death, and show me the way to undo the Demon's curse."
Chapter One
Present Day
There was nothing angelic about Heavensent, Maine. Kyla Yaeger felt evil all around her, watching, waiting. A hell of a lot more was going on here than one werewolf. Her stiletto heels clicked on the sidewalk as she hurried up the street, but she couldn't outpace the feeling of malice. She had to block it out. Nothing could distract her from her mission. As an elite were-hunter, she had one job—slaughter the werewolf haunting this strange little town.
Anticipation of the next hunt pulsed through her. She hungered for it as an addict craved the next hit. Maybe someday she'd find the peace she longed for . . . but not until she had vengeance.
The fresh smell of pine from the surrounding woods wafted by on the slight breeze. The aroma brought the memory of that hunt in the Adirondacks. Foreboding chilled her. Her breath caught. Would she meet the black wolf again?
This time, she wouldn't miss.
Quickening her steps, Kyla reached the homey-looking restaurant, a welcome touch of normalcy in this place tainted by wickedness. As she grabbed for the door handle, someone on the other side pulled the door open. Losing her balance, she wobbled in the entrance as a hand cupped her elbow, steadying her. An electric charge coursed up her arm.
"Sorry." The deep voice was definitely male, with a trace of a British accent, and so close to her ear she could feel his warm breath. She inhaled his scent of spice, familiar, yet exotic.
The timbre of his voice ignited a spark of recognition in her. She was eye level with a very masculine chest covered by a black T-shirt that stretched over hard muscles and defined biceps. Slowly raising her gaze, she met deep topaz eyes—eyes touched with sadness that spoke of pain and unbearable loss. Thick, black hair framed the rugged beauty of his face. The large, jagged scar on his neck saved him from being too perfect. She didn't know him, yet she felt as if she did.
How odd.
He stood holding the door, not moving. The awareness in his eyes gradually changed to shock, then fear. Rooted to the spot, Kyla couldn't look away.
A roaring noise filled her head, and pain stabbed her temples, signaling a vision. The man, the restaurant, the street wavered. Disjointed scenes flickered before her. A tall man, his face shadowed, his long, black hair blowing in a rush of wind, stood before an empty grave. She felt his crushing grief as if it were her own.
She blinked, and the vision left her. And so had the mysterious stranger. The restaurant door closed slowly behind her, leaving her alone on the sidewalk. She looked both ways down the street, but the man seemed to have disappeared.
"Hey, I thought you were going to get us a table. I found a parking spot a few blocks away." Todd, her best friend and business partner, sauntered toward her. He frowned. "What's wrong? You look like you've seen a ghost, or maybe a werewolf."
"I don't know what I saw." A shiver ran through her. Had the man with the topaz eyes caused her vision?
Like what you just read? Want more? Follow these buy links to purchase and read the entire novel - Noble Romance and Amazon
Thanks for reading!
Elaina
Posted by Elaina Lee at 2/24/2011 06:30:00 AM