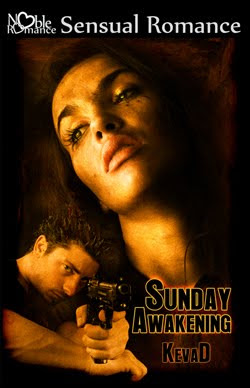 Sunday Awakening is at the very top of my 'to buy' list when I get an eBook reader in a couple weeks. I have heard nothing but amazing things about KevaD's novel, and can't wait to read for myself this compelling romantic suspense. Please take a moment to check out the excerpt below and then check out the entire novel. You won't be disappointed.
Book Specifics -
Genre - Romantic Suspense
Length - 81k (novel)
Heat Level - 2
Sexual Orientation - M/F
Content Warnings- Reference to child abuse - Reference only as it's part of Cheryl's past.
BLURB -
If the microwave hadn’t blown a fuse, she might not have killed him. But it had, and she did. Sundays are like that sometimes.
After stabbing her keeper to escape his abuse and her sex-slave life, Cheryl faces the greatest decision of her twenty-six years: “Now what?” Only one thing has ever brought her comfort and a sense of freedom—running. So she does.
On her journey to discover who she is, and where she came from, Cheryl happens upon a woman who puts her onboard the modern-day Underground Railroad for abused women.
At each stop, each "depot," she encounters people who teach her love may not just exist in novels. But is love possible for someone who doesn’t know what it is?
Criminal Investigator Taylor Hughes reluctantly agrees to locate Cheryl and find her “home.” When Cheryl poisons him, Taylor realizes the hardest part of the trip may well be the day he has to leave her behind.
EXCERPT-

She stripped the bed and tossed the old sheets into the parking lot. A creak of faucet handles preceded the spray of water in the shower. After unfolding and shaking out the new sheets, she listened intently to the muted noise in the bathroom. The walls were tissue paper thin. The beat of the water on the porcelain of the tub stalled when he stepped under it. He was naked.

The image of his sweaty body running beside her—lying beside her—refused to fade. She tucked the edges of the bottom sheet under the sagging mattress and slowly smoothed it with an open palm. The musical resonance of lathering soap floated about the room. There were no washcloths in there. The two Stockard gave her were on the side table. Taylor's hands were the bow playing the muscled instrument of his body.

She lay on the bed, slipped a hand beneath her shirt, then massaged sweat-oiled skin under the waistband of her jeans while she continued to listen. Behind closed eyes, she watched him scrub from his wonderfully broad chest to the hard slab of belly.

She traced a line from waist to breasts. Barely a B, they had swollen at the sound of him, at the nakedness of him, so near. The tips were erect and over-sensitive.

Heat pulsed beneath her skin. Her tongue wetted dry lips at the thought of his sinewy body so close, so out of reach, yet, reachable, if she chose him to be.

She continued to explore her body, while visions of his strong hands sliding over his manly form under the water and froth performed a mental ballet. A throaty gasp erupted at the slapping of his hands lathering the soap again. Fingers drove under her jeans, then beneath her panties. The basin of the triangle between her thighs thickened with moisture. She wanted this man. The ball of passion rolling from her throat to her groin demanded him.

Her fingertips massaged the center of her desire. Hips writhed in response.

She jerked her hand out of her clothing and stood. Her decisions were her own now, and she had met a man she wanted. A smile formed. It hadn't happened before. There was a man in this motel room she desired. She wanted Taylor Hughes in her, on her, and every way he wanted to have her. He might be gone tomorrow, and this opportunity with him, once he learned the truth. There might only ever be this one night to know what it felt like to make . . . love . . . if such a thing held possibility for her.

He debated where he'd be sleeping while he washed. She was only feet away, on the other side of the wall, and he was having trouble keeping his loins from expressing their want for her.

He turned off the hot water. The heat of his skin immunized him to the cold. He couldn't begin to explain why he felt a hunger for this woman he had just met. It didn't make any sense at all. Every logical part of his brain said this was wrong.

She needed his help, not his complications. There were things going on inside her he couldn't begin to fathom, and his mounting longing to taste her might only serve to push her further from herself.

He couldn't stay in this room tonight. Maybe he'd just sleep in the Jeep.

The clink of the shower curtain rings spun him around. His brain funneled every thought into one—she was the most beautiful and sensuous woman he had ever seen.

"Cheryl, no. I can't—" His body throbbed its betrayal of his words.

A finger to his lips silenced the objection. She stepped into the tub. "This isn't about what you want."

Thanks for reading! Hope you enjoyed.