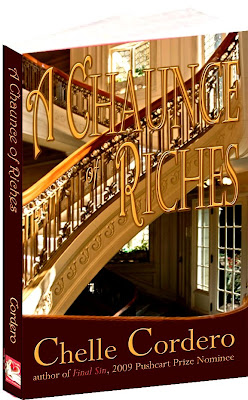 Today I get to introduce to what looks like not only a sexy story, but an intriguing one as well! Please take a moment and check out Chelle Cordero's novel, A Chaunce at Riches.
Book Specifics -
Genre- Contemporary Romantic Suspense
Length- 59k (novel)
Heat Level- Sensual
Sexual Orientation- M/F
Content Warnings- Graphic Sex
Blurb-
Ben Johnson was hired as a bodyguard for a rich widow and her kid, but he never expected to be working for the woman who had abandoned him just when he had needed her the most. Damn it all, he still wanted her. Samantha Chaunce never thought she would have to explain why she married the rich man instead of Ben. Or that her husband had been murdered...and Ben was the prime suspect.
Excerpt-

“So what happened to you Sam? I really thought we had the same values and the same dreams. When did money become so important to you?”

She didn’t want to have to defend herself to him. It would be too easy to be swept up in a lie. Looking away from him, afraid that he could read her pain, she barely whispered. “What makes you think it wasn’t important all along?”

“I thought I knew you better than anybody else. Just like I thought you knew me better. You were the only person I ever let get close to me.”

Sam had already been in the foster home when Ben came to live there. Her parents had died in a car accident. She had been rescued, orphaned, from the wreckage. There was no family to replace the loving parents she remembered. She had been the only child of two only children. There was an ailing grandmother halfway across the country but no one else. Her grandmother sent what money she could for the few years she lived but she couldn’t take care of a child. Samantha had just started kindergarten when her world was destroyed.

It was a little more than a year later when Ben, already eight, the same age as Philip, was taken away from his drug addict mother. She had tried to sell him for drug money when she came up short but he had kicked the pedophile she was bargaining with and ran away. It angered her and she sent him into the streets to fend for himself. He was scared, homeless and hungry for almost two days when Baltimore cops picked him up and child services got involved. Ben was brought to the foster home; there were six other kids including Sam and two more birth kids belonging to the couple. It was a relief not to have to hide in the closet while his mother turned tricks to get drug money. But the child in him still felt resentment that his mother had tossed him away like garbage. And the child in him was terrified that he would lose the newfound comfort his foster family provided him with. He couldn’t relax, he couldn’t trust. Sam was the only one who could get through to him. She was the only one who made him feel safe.

He had come to the foster home early in the fall, just in time to start the school year. He was lacking in education because his mother never made sure he got to school each day and he was embarrassed. Even though Sam was younger than him, she helped him study and eventually catch up to his grade level. Then, when the excitement of Halloween drew near, he was terrified when the other kids talked of donning costumes and going door-to-door for candy. He refused to go, he was afraid he would have to do more than just ring doorbells. But when the other kids came home happy and laughing and with sacks filled with candy, he felt left out. Sam dumped her bag of candy in front of him and said it was too much for just her, he had to help her and eat some of it.

They were inseparable as they grew up together. He realized in his teen years that he was falling in love with her but that kind of a relationship would have been just too weird. So it wasn’t until after his eighteenth birthday when he was living on his own that he even let her know how he felt. And it wasn’t until she was eighteen and living out of the foster home that he finally asked her out on a date. It was always just the two of them. At least that’s what Ben had thought.

She still couldn’t look at him. “I had just gotten out in the world and I made choices.”

“But why? You told me you loved me. You said you needed me. We were working towards a future...”

A tear rolled down her cheek. She remembered the things they had promised each other and it was sheer torture to hear him reminding her. “What kind of future did we have Ben? I was working selling donuts in a bakery and you were hoping for something better than a sales job at the hardware store. We didn’t have two nickels to rub together.” She never would have had the money she needed to make things right again.

“So it was the money?” Ben sat at the edge of his chair. “And you couldn’t even wait to tell me yourself? You just left.”

It was another car accident that had changed her world... again. Sam had little more than a broken arm and a minor concussion. Ben was in a coma and had a severe spinal injury. He almost died. There were so many complications. She couldn’t look at him. “I did what I had to do.”

“Are you that much of a coward?” She couldn’t answer him “And he was almost thirty years older than you. Was his money so attractive that you didn’t mind being with a man who was old enough to be your father?”

“He bought you.” Just like all those johns who had bought his mother. His voice was edged with disappointment and pain. “Sam, you sold yourself. Did you enjoy letting him put his hands all over you? Was it worth it? I really thought you were different from my mother.”

“I have contracted with your agency for your services. I think that is the only relationship you and I need to have...” She started to walk towards the door. She turned back to him. “Breakfast is at seven, Philip needs to be at school by eight-thirty. Please manage to find it in your talents to be civil with me in front of my son. He seems to like you and I want him to feel safe. But Ben, I won’t hesitate to have you replaced. Remember that.” She left the room without looking back.

Thanks so much for stopping by, hope you enjoyed!!!