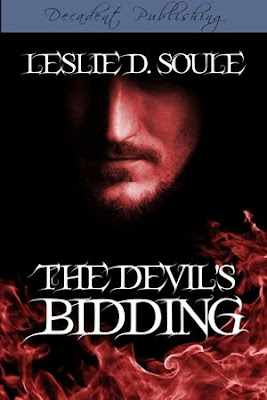 Today I introduce to you a quick read which looks utterly intriguing. So sit back and hopefully relax and find a new short story to occupy your time.
Book Specifics -
Genre - Paranormal Romance
Length - 5k (13 pages)
Heat Level - Sweet
Sexual Orientation - M/F
Content Warnings - Depicts Satan
BLURB -
How much is your soul worth to you? If you're Tom Harper, not a lot. Still reeling from the loss of his soul mate, he thinks a soul is worth nothing without someone to share it with. Grieving, broke and tired, he offers it up for sale. But with a few clicks of a mouse, he realizes that it is worth more than he ever knew and that some things are worth more than all the money in Heaven... or Hell.
EXCERPT -
Fear rose within him as the thought occurred to him that perhaps he had been wrong about there being no danger in what he had done. He had never been a very religious person before, and had only gone to church when he was little, when his parents had forced him to go. In his heart, he longed to understand religious devotion in some intimate way, to feel a divine glory surge through him and pull on the threads of his heart, but he had never been able to. He desperately wanted to believe in heaven and hell, and that maybe there’d be a possibility that he and Brenda could be reunited somehow, in the afterlife, if he completed enough penance in his lifetime to redeem them both.

Rifling around in his desk drawers, urgency tightened his throat, making it difficult to swallow. He found the rosary his mother had given him long ago, its silver crucifix a cool, reassuring weight in his hand. Larger silver beads were spaced in between smaller, black obsidian beads that rattled slightly as he placed it over his head like a necklace, crucifix resting squarely over his heart. Wearing the crucifix felt a bit silly to him, like relying on magic, but any form of divine protection would be better than nothing, just in case. Any port in a storm, he reasoned.

Curious? Want to know what happens next? Follow these links to find out: Decadent Publishing, Amazon

Thanks for stopping by, hope you enjoyed!