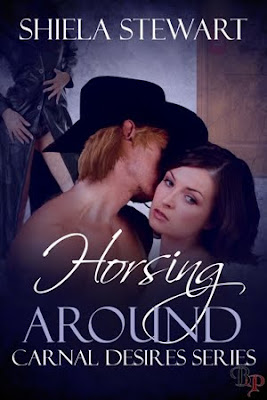 Carnal Desire’s: We've got a match for all your sexual pleasures.

Sara Miller needs a real man. One who can give her what she desires in and out of the bed. So far, none have met her expectations. She’s hoping all that will change after submitting her application to Carnal Desire’s Web dating service.

The owner of several prize-winning horses, more money than he knows what to do with, Andy McDonald has it all. Except for the love a good woman. He’s sick of flighty bimbos wanting only his money and not satisfying his sexual desires. After a friend pressures him into looking on line for a woman, Andy gives in and submits his application.

Sex takes on a new twist when Sara and Andy get together and nothing is taboo.

Sara’s heart was beating so hard, she was sure Mistress Bella could hear it. She could very well turn tail and run. Why did she need a man in her life right now, let alone someone she might consider for the long haul?

Then the door opened. Before her stood the most gorgeous man she’d ever seen.

He wore nothing more than a towel around his hips, dipping low enough to reveal a thin line of hair from his navel down. . His chest was glistening with moisture from the shower he’d obviously just stepped out of and was firm and muscular. His sandy blond hair was damp and messed up. He had a bit of stubble on his face, which made the ruggedness even more prominent. And when he smiled, those big blue eyes twinkled. He was definitely yummy. His picture didn’t do him justice by any means. Sara nearly swallowed her tongue.

Her heart calmed. His slight Southern drawl, with its deep resonance, was soothing and somewhat relaxing. And very arousing. She loved a man with an accent, and even though Andy’s was faint, it was still enough to turn her on. Between her legs, her flesh began to swell and moisten.

"Good afternoon, Andy. Looks like we caught you in the middle of your shower."

He stroked the damp sandy-blond hair from his face and Sara nearly swooned. "I just stepped out. I’m running a bit behind, I’m afraid." He turned his attention to Sara and her pulse pounded in her ears. "Pleasure to meet you in person, Sara."

She took the hand he held out to her; he completely surprised her when he turned her hand over and brushed his lips across her knuckles. "Pleasure’s mine." Like tiny electrical charges zapping every sensitive nerve in her body, he had her quivering with that one simple gesture.

"Well, come on in and make yourself comfortable while I go change."

He stepped aside to let them in and as Sara walked past him, the scent of the woods after a light rain shower wafted off of him, like fresh, aromatic greenery touched by a kiss of sunlight. She was going to have no problem at all being with this man.

She and Bella headed to the sitting area of the suite while Andy headed to the bedroom. It was spacious, and came complete with a mini kitchen, sitting area, TV and plush sofa and chair. Almost identical to her own suite.

Sara smiled at Bella’s comment, taking a seat on the sofa. "I’m not having any trouble looking at him."

"And what better first meeting than to see him practically naked." Bella winked and beamed a huge grin. "Well, I’ll leave the two of you to get acquainted now. If you need anything, you know where to find me."

"Thank you so much, Mistress Bella."

"I love making people happy. I’m heading out, Andy," she shouted at the bedroom door.

"Catch you later, sugar." He stepped out of the bedroom, dressed in jeans and a dark blue t-shirt just as Bella left the suite. "Looks like it’s just you and me now, doll."

God, he was going to make her come, just by speaking. "Looks like.” She got to her feet. “So…how should we start this?"

"Let’s start with this as an opener."d

He swung his arm around her waist and she gasped when he yanked her against his chest.

If you're curious and want to know more, following these buy links: Breathless Press, All Romance

To find out more about author Shiela Stewart, check out her website: www.shielasbooks.ca

Thanks for stopping by!

Email ThisBlogThis!Share to TwitterShare to FacebookShare to Pinterest
Labels: Horsing Around, Horsing Around excerpt, Shiela Stewart