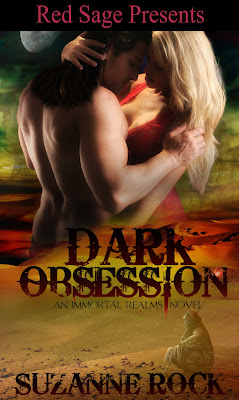 Long ago Javier chose to walk away from one person that mattered most in his life. Now that he is free to once again roam the Earth, he becomes obsessed with making up for past mistakes. His mission is to gain Catherine's vote on the Immortal Council, but when he sees her he realizes he wants much more than her support for the vampires. He wants her heart. When she disappears from the Immortal Council’s halls, he tracks her down, determined to get her to remember the past -- and the love they once shared.

Catherine can’t let the passion she had with Javier rekindle again -- no matter what the cost. Much has changed since he abandoned her so long ago. With the Immortal Council fragmented and her werewolf king abducted, Catherine has little patience for Javier's empty promises. Still, Javier is persistent, and soon she sees the value in having an ancient vampire for an ally. A deal is struck: she will submit to his every carnal desire if she can gain his aid in finding her king. Unfortunately, things don't go as planned, and their erotic interludes ignite the passionate anger of Catherine’s only fey ally. Now all three of their lives are in jeopardy, and to survive Javier must build an intimate bond with the only woman who has ever rejected his love, and a man who’d like nothing more than to see him dead.

He was here. Catherine slipped into the servants’ tent between the parked caravan trucks and paused to catch her breath. She was alone. Finally.

Javier had found her. She had no idea how he had managed to track her this far south, but he had, and now her whole plan was in jeopardy.

She wiped away a tear of frustration. Javier had abandoned her almost two centuries ago. Now he waltzed back into her life, expecting to pick up right where they had left off. He should have known that things had changed. Life wasn’t the same as when they were both young senators in Barcelona. It was more complicated now, and more dangerous.

Of course, Javier wouldn’t see it that way. Within hours, he’d probably sweep into this tent with his usual bravado and demand to know why she’d run away. She didn’t want to answer that question, or any of the others that swam in that thick skull of his. What would she tell him, that she left him because she had finally grown up? That after a century of hoping and praying for his return she had given up and moved on with her life?

She wouldn’t give that pompous windbag the time of day if he was the last male in the Immortal Realm. It didn’t matter how gorgeous he looked, or what wicked things he could do with those fangs. He couldn’t just sweep into her life and expect to control it. No one could.

Now his presence here put both of their lives in danger. If Feroas had any idea that a vampire and a werewolf were in his camp, he’d have them both killed. He could do it, too. She had no doubt about that. Few knew about Feroas’ ability to manipulate magick and emotions, bending them to his will. She knew, however. That was why she had to get Javier out of here, fast.

She moistened her lips as his image flashed once again through her mind's eye. Javier’s appearance hadn't changed much since she had last seen him. His white robe couldn’t mask his broad, muscular shoulders or his gorgeous backside. He still liked to arch that noble brow at her, and give orders with those firm, commanding lips. It couldn’t hide his earthy scent or cover the power and confidence that radiated from his body. His presence was a heady aphrodisiac for a wolf. Her natural instinct was to submit to such an alpha male. And those black, fathomless, eyes… it was as if he could caress her soul with a glance -- just like he often did when they were a couple.

She shook her head in frustration. He was vampire, forbidden in every way. They were lowly, obtuse creatures that put their own needs before anyone else’s. At one time she’d thought Javier was different. He had proved her wrong, though. She had to remember her ex-lover's true loyalties. They weren't with her, that was for sure. If they were, he never would have left her all of those years ago to face the bigoted Immortal Council alone. At the end of the day, all vampires were scum of the Earth. She was better off without them.

Only, how did she tell him that and not piss him off? An angry vampire -- especially one with Javier’s talents -- could ruin everything. The best course of action was to gently put him in his place and then disappear, just like he did to her all of those years ago.

A sudden breeze brushed through the opening in the tent. It drifted through her silk robes and brushed over her skin. Cold speared her core despite the hot desert sun. He was looking for her. Strong vampires like Javier could walk in between seconds, in the space of ancient immortals. As a werewolf, she could do the same, but she lacked his speed and skill. Her movements were like a toddler learning to walk. His were the smooth, fluid movements of a master.

She had to protect herself from his touch. One way would be to put distance between them. She couldn’t run out of the reach of his magick, as she did in Barcelona. Unlike Javier, she had more to think about than just herself.

Catherine grabbed the little metal box on the table and lifted the lid. A small red jewel on a leather strap sat on a mound of black silk. The bloodstone’s pulsing glow told her danger was near. She’d had two of them made a long time ago. One for her, and one for the human senator who had helped her pass sanctions against the vampires. Javier had insisted. He knew better than anyone what his kind was capable of doing, so he showed her how to forge the stones from an ancient magick. They warned if when a vampire was near, or if a vampire’s thoughts were focused on her. The stone didn’t give her a lot of warning, but it was enough so that she could protect her body from the deadly fangs. Over the years she had improved upon her stone until it could protect her from the simpler vampire magicks, like glamour. Unlike others on the Council, she’d never believed all the vampires were dead. She knew better.

Unfortunately, all the shielding spells in the world wouldn’t protect her heart. Javier was obtuse, yes, but he was also charming, and he knew her well. He could use that knowledge to bring her to her knees, if she let him.

Catherine ran her fingers over the bloodstone, its pulsing heat warm against her hand. It sensed Javier. He was looking for her, the fool. She had taken off the stone when she entered Feroas’ camp, not willing to draw attention to herself. She’d had no idea that Javier would follow this far south.

She closed the lid to the box and set it back on the table. Courage. While the bloodstone was powerful enough to avoid his physical touch and his glamour, it would do nothing against his stronger powers. What was she going to do?

She couldn’t protect herself with a magickal shield or risk exposing both their identities to the king. Months of planning would be washed down the drain because a pig-headed vampire wouldn’t take no for an answer.

She turned her head and eyed the garlic on the table, left over from the evening meal. It was a long shot, but she had no other choice. He was hunting her, she could feel it. With a shaking hand, she reached out for a large, round bulb.

The word ran through her like water, stilling both her arm and her mind. She was so close to the garlic. Just a few more inches… she tried to reach, but her arm wouldn’t move. She turned her gaze to the metal box. The bloodstone shone so bright that its glow shone through the cracks in the lid.

If she wanted to control her body once more, there was no choice left but to use her werewolf power. While the magick of vampires and feys was more predatory, werewolf magick was more protective. She tried to pull her thoughts together to weave a basic spell, but the command to relax was too great. She dropped her arm and sagged against the tent pole as molten fire slipped up through her core, bringing with it a surge of desire. Her pussy clenched and her nipples pebbled in anticipation.

"Javier." She arched her back against the pole as warm, silken ribbons embraced her and turned her muscles to liquid. She felt her body slip into the space between seconds, the place of the ancient immortals. Time eased to a standstill and she was helpless to stop it. "You found me."

“You’re a fool... Feroas…” She hissed in a breath as unseen hands ripped her robe open. Pleasure washed over her skin and invisible palms cupped her breasts. Her nipples responded to the familiar touch, and her desire dampened her thighs. She closed her eyes and struggled to form a coherent thought. “We’ll be discovered.”

Incompetent fey kings and cheap rocks can’t keep me away from you, Catherine. You belong to me. Now and always...

“The charm worked because you caught me off guard. It won’t happen again.”

It was true, she knew it. The air around her stilled as time slowed to a standstill. Catherine’s jaw clenched as she fought her ex-lover’s magick. Javier’s powers were just too strong, especially now that he had her hair. She’d have to give in for now and wait for an opportunity to escape.

Yum! Want to know what happens next? Follow this buy link - Red Sage