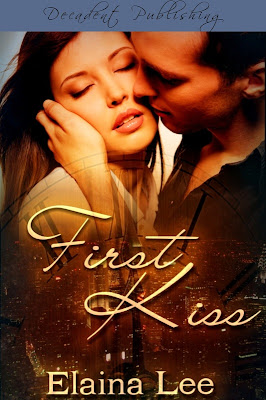 Yay! *squeee* Today is the release day for my novella, First Kiss, published by Decadent Publishing. I'm so super excited to introduce this novella to you! So here's all the information about it AND if you leave your email address in the comments section, I'm giving a way a FREE (ebook) copy in celebration!!!
Book Specifics -
Genre - Contemporary Romance
Length- 37k (novella)
Heat Level- Sensual
Sexual Orientation- M/F
Content Warnings-
BLURB -
A kiss can change everything...
When Michelle Seaborne is assigned Alexander Trent at the music label she works for, she knows she's in for a rough time. Fifteen years ago, Alexander was her first kiss. The moment, and his handsome face, have haunted Michelle's dreams ever since. Of course, he doesn't remember her. So, if she plays her cards carefully, he won't, and they can move on with the project, her heart unscathed. What she doesn't count on is a sensuous night in his arms, and the hope for something more. Any beliefs for a relationship are dashed when Alexander hands her a box, a thank you for a night, and a goodbye.
A man can only make so many mistakes, and Alexander is ready to stop making them. At least, that's what he keeps telling himself. An unexpected passion filled night changes everything, and unsure of the future he can give, he does the only thing he knows how. He ends anything before it can begin. Something about Michelle pulls at his memory though. Despite her assurance they've never met, Alexander can't help but wonder, how does he know her? As doubts about Michelle's words grow, so do his feelings towards her. Only now, how does he redeem himself?
EXCERPT -

Michelle stared at Emily, her heart raced. Oh God, she was going to be working with him! Alexander Trent had a terrible reputation for perfection. He wouldn’t settle for anything less. Michelle worked with perfectionists every day; she had very little control over creativity. This meant, for hours, she and Alexander would be alone, in a small mixing booth, listening to his powerful piano while she added what he wanted.

“Michelle? Are you all right?”

“Yep, it’s official,” Emily said with a resigned sigh. “You have to introduce yourself now. Get it over with at this party. Use me as an excuse to leave his presence if you must. I won’t get mad.”

Her hands fisted at her side and she growled. “Ohhh, you’re so aggravating!”

Emily spun her around and gave a shove, sending Michelle stumbling into the throng of company guests. Perhaps if she looked at Alexander as a man who’d break her heart, she wouldn’t have such a hard time. Great, she settled the issue. Alexander would treat her like every other man, she’d take it, say thank you and carry on with her life. Perfect. She could do this.

What if he was different, though? What if underneath the now shorter brown hair, cute nose, sensual mouth, and tall, built frame, he cared…that thought had Michelle pausing.

After all, wasn’t he getting out of the Rock industry to start over? Maybe, just maybe, someone normal, like her and not Blondie over there, would fit the bill. With a shake of her head she frowned. Why was she doing this to herself? Unlike high school, fantasizing about him giving up the girl didn't work. Emily was right. Be professional, say hello, get the moment of torment over with, and go home to be with Muffie .

Ten feet from him, Michelle used every second it took to close the distance convincing herself she was better than the woman on his arm. Her five-foot-four, hundred and thirty pound frame had nothing on that stick figure. Her auburn hair was far prettier, longer even, down to her hips, without the bleach damage. Hah! She knew that hair was fake from across the room. And her face…well, some valued delicate features. Russian facial structures were so…mannish. Michelle smiled.

Quelling the butterflies in her stomach, she stopped behind him and readied herself to speak before he could turn around. Then the unthinkable happened. The room began to rise in a loud count down. Oh no! Ten…nine…eight…The first kiss of New Year’s…. Her sense of flight kicked in and she whirled around, but everyone in the room converged together, their glasses held up. The shouting intensified. Six…five…four…

The perfect kiss he would give the woman was too much for Michelle. She’d seen pictures of those lips kiss too many women, felt the stupid pang of unwarranted jealousy. All she wanted to do was cover her ears, disappear into the floor, willing the night to be over. She settled on simply closing her eyes and standing still. No one would notice her. They never did.

“One!” The room erupted into a loud roar.

Strong lips touched to hers, soft, caressing. Her eyes flew open as he pulled away, her stomach flipping in nervous disbelief.

For more information, check out www.decadentpublishing.com

Thanks for stopping by, don't forget to leave your email address if you want a chance to win a free copy!