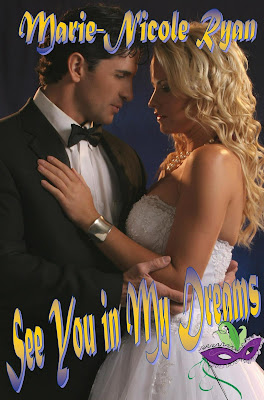 For week thirteen of the All Things Romantic Suspense tour, I'd like to welcome Marie-Nicole Ryan!

Before we begin, tell us a little about you -

Do I have to? Okay, here goes. I grew up in Western Kentucky, married way too young, and moved to Tennessee. After the DH and I went our separate ways, I remained in Tennessee for way too long. No, actually I loved living in Nashville. Somewhere along the line I also went to school and became and RN. I also obtained a degree in interior design, but didn’t want to give up my decent salary as a nurse to start at the bottom as an interior design assistant. I have an adult son and a diva of a Sheltie named Cassie. The son is out on his own, but Cassie stays by my side. Last fall I moved back to Western Kentucky and I’m learning to enjoy the small town life again. It’s been wonderful reconnecting with all my old friends.

Hm, guess I might mention that I started my first novel on an old Smith Corona portable typewriter back in the late Seventies, but didn’t quite finish. Computers are so much better for writing. I’ve won a couple of awards: Golden Wings Award back in 2003. That’s an award from my publisher. I also won an EPPIE in 2008 for TOO GOOD TO BE TRUE, my first book with Samhain Publishing. My one mystery/suspense, ONE TOO MANY, also finalled in the 2009 EPPIEs in the mystery/suspense category.

So you’re a Southern gal. *grin* Have you ever lived outside of the South? Did you ever want to?

As a matter of fact I have lived outside the South. For several months I lived in Laurel, MD, when my DH was stationed at Fort Meade. I would love to have a summer home in the Finger Lakes area, specifically Canandaigua. It’s a beautiful area in the SUMMER.

What is your favorite thing about the South that you haven't found anywhere else?

That would be barbequed mutton which is only found in Western Kentucky.

You write mainly romantic suspense, is that your favorite genre, or would you like to try to branch out more?

I love romantic suspense , but would love to develop a purely mystery series.

What is your favorite part of writing romantic suspense?

When do you find yourself writing? Is there a set time of day or do you just write when inspiration strikes?

I prefer to write in the morning while I’m still fresh.

What has been your best writing experience? Your worst?

The best was and is working with my Samhain editor, Linda Ingmanson. The worst was rewriting a book four to five times for four different editors at two different publishers.

What advice would have for a new author receiving negative criticism for the first time? You know, the kind that tells you you're bad writer and will never amount to much? I envy those who have never been told those words…

I’ll tell that person what someone told me when I received two stars from a certain review magazine which basically said my book was a “weak debut.” She said, “Just remember it’s only one person’s opinion. Nothing more. Nothing less.” I would also recommend chocolate, whining privately to friends and not showing her or his butt on the internet by trying to argue with the reviewer.

Thank you so much, Marie-Nicole, for stopping by! Please tell us where we can learn more about you:

Certainly. And that you so much for having me. My web site is http://marienicoleryan.com

I hope you enjoyed this interview with Marie-Nicole. Please stop tomorrow for an excerpt from her romantic suspense: See You in My Dreams