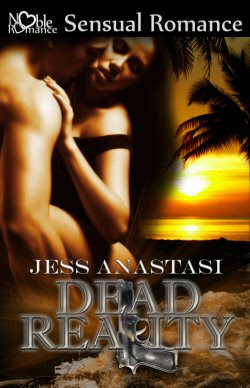 Here to share her Science Fiction/Fantasy Romantic Suspense is Jess Anatasi! Wow, now if that combination doesn't make you sit up and take notice, I don't know what will. *grin* Hope you enjoy!
Book Specifics
Genre - Sci-fi, fantasy, romantic suspense
Length - 58k (novel)
Heat Level - Sensual
Sexual Orientation - M/F
Content Warnings -
Blurb
FBI Special Agent Ella Waverly is wrapping up one last assignment before heading off on her first holiday in five years. But flip-flops and cocktails are the last thing on her mind when she meets the new team leader, Special Agent Bryce Lain, and finds out her holiday is being scuttled for an undercover assignment.
Agent Lain is gorgeous, the kind of gorgeous that guarantees he’s an arrogant jerk. The news that he’ll be her partner in the dangerous mission is almost enough to make her head explode. Before the day is out, Ella finds herself at Little Palm Island Resort in Florida, masquerading as a contestant on the latest reality TV show – Lord Bachelor. The bachelor in question, a disgraced British peer, is suspected of raping and murdering several women back in London.
As humidity frizzes her hair beyond the help of any type of de-frizzing, smoothing, glossing product, Ella tries to wrangle working against nineteen husband-hungry bimbos, one suspected serial killer and one seriously hot agent who’s trying everything he can to get under her skin.
Excerpt
"Waverly!"
As Jim called to her, Ella paused and tightened her fingers around the sharp edges of the keys. She hoped the smile on her face didn't look strained as she turned around. The mystery agent had joined the group, hip indolently against the car and looking like a street-wear model. Seeing him from the front for the first time kicked her annoyance up another notch.
His light brown hair, short and spiked, topped a face gorgeous enough to send her IQ plummeting into the realms of ga-ga land. His features were all well-defined angles with rich, hazel-green eyes and full, pouty lips. The combination should've looked ridiculous, but instead managed to appear irresistible. Although his countenance was too rugged to be considered classically handsome, he'd an almost boyish charm no woman could ignore, even if she wanted to. And Ella really wanted to.
On the surface, he appeared nothing more than a gorgeous guy, but on some level, she could sense a hardness about him. Some indefinable quality, which should warn a girl away, but instead, made her want to get closer. Not only that, he had to be at least six foot-three. The whole package was enough to make a woman want to take a second look, and most definitely a third. And then maybe several more.
No doubt, he was one of those guys her mom had warned her to stay away from. Like those burnished gold heels lying in the bottom of her closet back home. She knew she shouldn't wear them because,damn, they hurt, but they just looked so good.
He turned those deep hazel eyes on her, and she almost tripped over the curb. Heat. His gaze moved over her, and she shivered with burning awareness. An instant later, he looked away, leaving her confused and trembling.
Ignoring the idiotic pounding of her heart, she stopped in the space the three men had made for her, concentrating on keeping her expression polite but distant. Mr. Intense barely spared her a second glance. That, added to his rude interruption earlier, didn't help her opinion of his extreme egotism. Why were the breath-stealing men always jerks?
"Ella Waverly, this is Special Agent Bryce Lain, the new team leader," Jim said.
She held out her hand automatically, which Agent Lain shook in a straightforward manner, giving her a charming smile that all but yelled, I'm-hot-and-I-know-it. Her civility slipped yet another notch.
Then the name clicked in her mind, and all the pieces fell into place.
Bryce Lain?
Oh, no way.
She'd heard about him, right back from when she'd started at the academy in Quantico. And not because he was a stellar example of an agent. Okay, from all accounts, he was a kick-ass operator, but his reputation with women had become the stuff of legends. Most of the guys she knew thought Lain was some sort of all-around hero, while the women wondered what it'd take to get him into bed. Not much, she guessed, from the looks of it.
She'd only ever distantly crossed paths with Lain over the years, and those few times hadn't improved her opinion of him or dispelled any of the rumors she'd heard. Between his scruffy appearance and the fact that it'd been a few years since her last encounter, she hadn't recognized him.
He was the new team leader they'd been expecting? She would have to work with him on a permanent basis? Worse, she was going to have to answer to him? She'd have to look at that movie-star handsome face and put up with his attitude every day? Her head would quite possibly explode from the thought.
Want to know what happens next? Follow these buy links to find out! Noble Romance, Amazon
Thanks so much for stopping by!
Elaina
Posted by Elaina Lee at 4/09/2011 06:30:00 AM