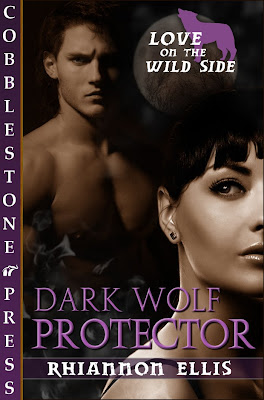 Animal rescuer, Jaci Waters, has her hands full when a rogue wolf invades her small, backwoods town of Tall Oaks, Alabama. Her goal is to not only protect her neighbors and fellow townsfolk, but to capture and relocate the trouble-making canine who's worn out his welcome. Little does she know, the wolf is more than meets the eye. He's here, in Tall Oaks, for Jaci. But he's not the only one...

Dolton Freye has come to the speck-sized town with one goal in mind: kill the blood-thirsty bastard who's stalking and out to get the woman he's sworn to protect.

Sheriff Braxton patted Jaci on the back. “Tough crowd tonight.”

“Tough.” She pushed her thick black hair from her shoulders. “I could think of a better word than tough.” She hated to admit it—and good old-fashioned manners kept her from doing so aloud—,but the biggest perpetrators of Tall Oaks’s dissention were folks like Ian, who were too...tough to grasp concepts other than shoot it dead when it came to troublesome animals. Then again, Ian and his cohorts didn’t have thirty or so strays inhabiting their properties. Jaci sighed, wondering if she was the odd one out, and slipped her fingers into the back pocket of her cut-off denim shorts.

The handsome stranger hadn’t budged from his back-of-the-crowd location and was the only spectator not making his way to his vehicle. Damn, he was good looking. They sure didn’t make men like that in Tall Oaks. Who was he?

“They’re just scared.” The sheriff removed his hat and ran a hand through his thinning hair. “Give ‘em some time, girl. They’ll come around.”

“I know. I just wish they weren’t so intent on killing the wolf is all.” She shuddered, again, at the idea.

“That damn dog has caused about all the raucous this small town can handle. If a wolf pelt is what it takes to bring some peace to Tall Oaks, I won’t dismiss the idea.” He looked down at her with a hard expression that pinched his middle-aged face so tight he looked like he’d swallowed a lemon. Jaci gave him a look back—big puppy dog eyes, protruding bottom lip. Worked every time; the sheriff was a real softy. He let out a defeated breath.”Don’t get your drawers in a bunch. We’ll figure this mess out. Come on. I want you to meet someone.”

Sheriff Braxton led Jaci down his front porch to the lawn where grass was about as sparse as his hair. They headed in the direction of the stranger. Oh, boy. She didn’t know who he was, but she was about to find out.

The view only improved the closer she got. She’d always been attracted to personality over looks, which explained the multitude of misfit strays she’d rescued and housed over the years. Still, this stranger with his rugged good looks and five o’ clock shadow sent tingles so intense up her thighs she was on the verge of arousal.

Touch me. Here. There.

For goodness sake. She was in heat! She sucked in a deep, composing breath and lifted her chin regally as the sheriff made introductions.

Her heart betrayed her poise with a quick, jolting somersault. “So nice to meet you.” She smiled and noticed the high-pitch of her voice, how she’d unintentionally emphasized so. Was she flirting?

“Pleasure’s mine,” he grumbled, his husky voice brooding like his appearance. His gaze touched hers as sensuously as lips could, brown eyes that signaled an alluring mix of gentleness and danger. Never had she seen lashes so dark, so utterly severe, as if they’d been painted with some of that fancy liquid eyeliner the models used. But this man wouldn’t wear makeup; nothing about him spoke of femininity. In fact, Dolton oozed of masculinity so pure, so intoxicating, a woman could get drunk just from close contact.

Years of working around injured and often skittish animals taught her control over her instinctive body movements and helped Jaci resist the urge to fan herself. Southern or not, fanning oneself in the presence of a sexy male was a little too obvious. She broke the strong hold of their visual contact, sobered herself, and concentrated on the sheriff.

“Dolton’s come to Tall Oaks to help us with our wolf visitor,” he said.

“Great.” God! Her voice still sounded high. She cleared her throat and focused on her pitch. “What’s your area of expertise?” This time she sounded a little less like a cheerleader.

“Wolves.” Dolton ran a wide hand through the thick mass of his dark, careless hair. The locks were as black as hers but wavy, unlike Jaci’s own bone-straight mane. He pressed his shapely lips together, showing he’d offer nothing more than his minimalist response.

“Wolves?” she pressed, lifting an eyebrow. “You’re an expert on wolves?”

“Well, seems to me you two have a lot in common.” The sheriff rested one hand on Dolton’s shoulder, the other on Jaci’s. “Maybe you can bounce some ideas off each other, bring an end to this whole debacle.”

“All due respect, sheriff, but I don’t need Ms. Waters’ input, or her ideas,” Dolton said, apparently not interested in the camaraderie the sheriff tried producing.

Crossing her arms, Jaci drew her head back. “Is that so?” she asked.

“That’s right.” He nodded, unapologetic in his reproach, though his eyes scanned up and down her legs.

She brushed her thick, straight bangs to the side, wondering how on earth she could find a man who pushed her buttons so attractive. “For your information, Mr. Freye, I happen to know a thing or two about animal rescue. I have personally captured—”

“This wolf needs to die.”

“I don’t need your ideas on capturing wolves because this particular wolf has to be killed, not caught.”

Just who did this Dolton Freye think he was? It didn’t matter. Jaycee knew what he was: Rude, with a capital R. Disagreeing with her ideas for animal captivation would have been one thing, but to outright dismiss her, to not even give her the opportunity to share her expertise, qualified as another. And this was her town.

“For someone who loves wolves—”

“Never said I love them. But I know them. The wolf stalking Tall Oaks is out for blood, and I’m going to stop him before he gets what he came for. Now if you’ll excuse me, I have a hunt to pursue.”

Dolton turned away and strode toward the forest’s edge. He carried no weapons that she could see, nothing that offered protection against the wild beast that stalked the woods where he headed. Yet, even without a weapon, she had a sense Dolton posed a great threat to the wolf. His size alone intimidated—about six foot four, she guessed, with a broad chest and wide, square shoulders. He towered over her own five foot seven self in a way that made her think of overpowering danger and warm shelter at the same time.

Embarrassed by her physical reaction to him, and irritated at his curtness toward her, Jaci knew she had to catch the wolf before Dolton carried through with his own plan. Tough guy? Please. He’d obviously never faced a pissed off southern woman before. She’d show him tough.

Interested in knowing what happens next? Head on over to the publishers and pick up your copy today! Cobblestone Press

Thanks so much for stopping by! Be sure to be here tomorrow for my interview with Noble Romance author, Jess Anatasi!