A little out of sorts 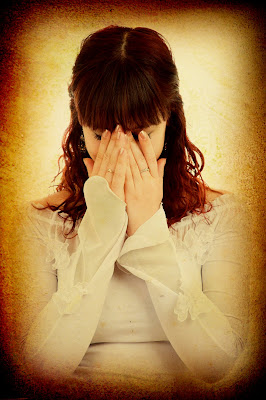 I know this is a bit of personal post, and not everyone appreciates those, but considering my blog went from super active to just barely there this week, I wanted to explain. I still have a lot of visitors, and I'm giving you all huge hugs, and I apologize for the lack of new content. I'm going to try to load my blog up next week, so you'll have lots of new stuff to look forward to!
As for why I haven't been here... Most of you who know me personally know we're going through a really difficult time right now. My grandmother is in the process of passing, and it's not been pretty. She doesn't seem real ready to go, despite having lost the ability to move, talk, or swallow. She can use one arm, but its just to push things around or grab hold of the bed-rail. She's in massive amounts of pain. And yet she still struggles against her situation and her fate. I have been horribly traumatized by the past couple days, I can't even begin to explain. Human suffering is not something I wish anyone has to ever witness, especially when it's someone you love.
Wednesday my mom had to take a break from it all. I'd had to deal with some screaming and pleading, but usually she was restful when I was there. My mother had to deal with the brunt of it. Well, that was not the case Wednesday. Mom didn't go in at all, at her breaking point mentally, so I went and sat with Grandma. Having to listen to someone scream (its not normal screaming, its a deep throated, agonizing yell) for three hours and beg is not pleasant. And while I can understand some of what she's saying, most I can't, so I can't help her. Just sit there and watch helplessly while she tugs at the bed, her clothes, her blankets and shouts incoherently. When it was the clear the medicine wasn't going to work, I had to leave. I was shaking so bad, and by the time I pulled into my parents driveway I was sobbing.
I've been spending most of my time vegetating on the couch playing games or watching kiddie shows with my toddler. He has been the best therapy, just sitting with me and letting me hold him, stroke his hair and watch TV together. Yesterday I was told by both my parents (much to the relief of my husband) to take a break. But I go back today and all of this starts again. Worse from what my mother has been saying... And as awful as it is, I can only hope as the week draws to a close, grandma slips into that peaceful phase that everyone keeps assuring us is around the corner. We love her and our desire to be with her is strong that we can't help but be by her side, yet what it's costing us is so great. Neither my mother or I will ever forget the sights or sounds we've had to endure.
So that's where I am and why I've been so quiet lately. Thanks for understanding.
Elaina
Posted by Elaina Lee at 4/22/2011 06:30:00 AM