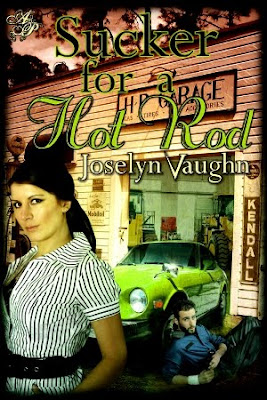 Bryce Halloway only dates a woman once. No exceptions.

It gives him the reputation of a heart-breaker, but he can handle that as long as it keeps his mother, Dinah, from trying to marry him off. Judi Montgomery and her tempting ponytail finagle their way around official dates with car problems and driving lessons. She worms her way into his heart and entices him to want more from his life.

When health issues causes his father to retire, Bryce inherits the family-owned tractor repair shop. Can Judi’s love and encouragement give him the courage to break tradition and pursue his dreams of owning a custom hot rod shop?

As soon as he’d closed his door, Bryce doubled over in laughter. “Rabid mice. I thought he was going to bite his tongue off.”

“After he watched me try to contort myself through the window the other day, he deserved it.”

Bryce arched an eyebrow and a devilish grin curved his face. “I wouldn’t mind seeing that. Care to demonstrate?” He pounded on the support to the open driver’s window.

Judi shook her head, backing away from the car. “No way. These are my best pants. Besides, I’ve been watching Daisy on The Dukes of Hazzard and I’ve got it all figured out.” She winked.

“Darn. I was hoping to give you some pointers.” He moved as if to boost her through the window.

Judi rolled her eyes. The idea of wriggling her behind through that window with Bryce watching made her cheeks flush. Big Jim was bad enough, but she could chalk it to ‘comes with the territory.’ Bryce, on the other hand, she’d hope he liked what he saw. And that’d make it doubly awkward.

“Spoil sport.” Bryce sighed. He headed for the Suburban. “Let’s take a look at your car before the parts store closes.” He followed Judi to the passenger side. She wrenched the door open and started to scramble into the seat. Her first attempt landed her back on the ground. Crashing against the door kept her from landing on her backside.

“You need running boards,” she mumbled.

Judi paused in her scrambling. “Springboard?”

A smile curved his lips. “Step down.”

Judi’s eyes narrowed skeptically, but she jumped back to the ground. Bryce placed his hands on either side of Judi’s hips and boosted her easily into the truck. Air rushed out of her lungs at the warmth of his closeness. He settled her into the truck seat. It seemed strangely concrete after the heady contact of his hands.

“So that’s why all the women want to date you? That’s so old-fashioned,” she said, trying to appear calm. Her mind was racing down detours she didn’t want to take. She’d only get hurt pursuing this line of thought.

Bryce shrugged and winked. “Do you object?”

The wink killed her. Any flirtatious comeback she might have had vaporized. She made a show of adjusting the cuffs on her sweater while he slammed the door. She couldn’t let him know she was as affected as every other woman in town.

Bryce grinned and slammed the door shut. When he climbed in the driver’s side, Judi was grateful for the extra long bench seat. The sparks of attraction had to lose momentum flying over such a wide distance.

Want to know what happens next? Follow these buy links to find out! Astraea Press, Amazon, Barnes & Noble
Thank you so much for checking out Jocelyn's novel! Please come back by tomorrow for Work Wednesday, where I'll be showing casing some of my cover art creations that are Serene in nature. :-)
Elaina
Posted by Elaina Lee at 5/24/2011 06:30:00 AM