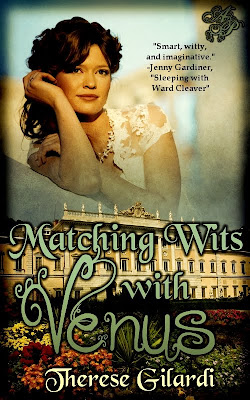 For centuries Cupid has longed to be more than Venus’s arrow boy. When he’s sent to eliminate “Happily Ever After by Amelia”, the matchmaking business threatening Venus’s status as the goddess of love, Cupid decides to steal Amelia’s methods and make his own matches. While spying on Amelia, Cupid accidentally shoots himself with his magical arrow and falls in love with her. But bereaved Amelia doesn’t believe in the existence of Roman gods, and she’s certainly not looking for romance. She’s too busy perfecting the patented personality profile that’s made her Hollywood’s favorite matchmaker.

Disguising himself as a mortal financial advisor, Cupid manages to break through Amelia’s guarded exterior. As their passion deepens so does Cupid’s guilt about deceiving Amelia. Cupid’s interference with Amelia’s life causes her business to falter, leads to a sterile spring that threatens the animal kingdom and shatters the longstanding peace between the Roman and Greek gods. With the fate of the natural and under worlds at stake, Cupid must decide whether to reveal his true identity and risk losing the chance to live happily ever after with Amelia.

In the valley below the thirty foot white block letters that spelled out HOLLYWOOD, between Ripley’s “Believe It or Not” museum and a string of psychic reading rooms, sat a glass-front shop with a rose-colored door. Above the storefront’s small bay window a pink and purple sign proclaimed “Happily Ever After by Amelia”. Inside, Amelia Coillard stretched out her hands to receive a large almond vanilla pie.

“It took me all night to make this,” a tall woman wearing an enormous pear shaped diamond on her left hand said, “But I wanted you to know how grateful I am. Really, Amelia, you’re the best. David and I want to invite you to our wedding. On June twenty-first.”

“Glad we could help Susanna. Don’t forget to tell your friends about us.”

The woman nodded, then strode past the wrought iron café table where Amelia interviewed clients, out onto the empty sidewalk.

“We’ve got another wedding, “ Amelia called out to her assistant Jennie as she stepped into the back room and placed the pie on a distressed pine sideboard, next to the boxes of chocolates, baskets of figs, bottles of champagne, potpourri sachets and bundles of beeswax candles she’d received from satisfied clients.

“Let me guess,” Jennie replied, rubbing her hands together. “The summer solstice.”

“Flowers in bloom, longer days, baby animals at the zoo. It all means only one thing: June brides. I don’t know how people can be so hopeful.”

“Hmm, well you’d better get ready. Your first client will be in to fill out her patented personality profile in ten minutes. You know, she actually asked me if I’d mail her the profile and let her fill it out at home! As if we’d release your proprietary secrets!”

“I don’t know what I’d do without you to look after me.” Amelia chuckled.

She reached inside the little cupboard in the corner and withdrew the fitted white crocheted sweater she’d gotten two years ago at the Rose Bowl Flea Market. The seller had told her the cardigan had been part of the trousseau of one of the old stars who’d lived up in the Hollywood Hills. Amelia wasn’t sure she believed the woman’s story, but the sweater’s delicate pattern reminded her of wedding lace, so she wore it every time she met with a client. And, though she never told Jennie, Amelia was convinced that the sweater from another woman’s trousseau was as close as she’d ever come to clothing herself in bridal wear.

While Amelia was pulling the sweater over her black mini-dress and adjusting her wavy auburn hair over its pearl trimmed collar, she saw a photo smiling out at her from the back of the cupboard. Inside the silver frame stood an extremely thin young man, his eyes protruding below penciled on eyebrows, a blue bandana wrapped around his head. As Amelia reached out to caress the photo she heard someone rapping on the back window.

“Justin,”she called out to the young man in the red and black leather jacket, torn jeans and scruffy tennis shoes.

Justin’s long hair needed a trim and he could use a shave, as well as a bottle of sunblock. Like many of the others who bedded down on the streets around Hollywood and Vine, his face was testimony to the hard realities of living rough under the merciless California sun.

“I’ve got something for you,” she said as she opened the door.

Amelia scooped up a napkin, fork and bottle of water from the table that held her teakettle. She handed them to Justin, along with a plate bearing half of the almond vanilla pie.

Amelia watched as Justin disappeared into the alley. She gazed up into the hills in the distance, at the faded ocher stucco mansion that stood atop the highest point. Long verandas seemed to wrap around the house, though it was impossible to know for certain if they ran across the back of the home, since the far side of the walled property was not accessible by road or foot. It sat atop a fault line; no one dared venture onto the rocky terrain for fear of disrupting the crusty earth beneath the bougainvillea bushes.

“Don’t,” Jennie said softly as she sidled up next to Amelia a moment later.

“Don’t go down that path, Lia. It’s not going to take you anywhere you want to be.”

“Do you have any idea how many cakes, cookies, tarts, baskets and bouquets I left on those stone steps? Do you know, I used to climb up to that gate every year on Christmas Eve and what should’ve been my parents’ anniversary and leave her these hand-written letters I’d actually sealed with a kiss. I taped those little Hershey’s candies to the envelope when I was little and then, in high school, I slathered red lipstick on my lips and ran my mouth across the back of the envelope. I can’t believe I was so stupid!”

“We all do dumb things.”

“Yeah but come on! Believing in the existence of an ancient Roman goddess AND that she lived right in my own neighborhood? Talk about desperate.”

“It does sound absurd when you put it that way. Plus everybody knows that house has been abandoned for decades. Why they don’t add it to the Haunted Hollywood tour is beyond me.”

Amelia nodded. As she took a final look at the mansion Amelia thought she saw a flash of light shoot out from its left flank.

Inside the ocher palazzo Venus flicked her cream colored scarf over her slender shoulders as she peered through the ultra-powerful telescope she had trained on Happily Ever After by Amelia.

“You have to do something about that woman or before you know it they’ll be tearing down all those statues of me and calling her the goddess of love.”

Venus turned away from the window and looked at her son. Cupid was sitting on the edge of a pink silk sofa, a thick clutch of papers between his muscular hands.

“If you’d just take a look at these spreadsheets, I think you’ll see I’ve discovered a way to streamline everything. I’ll be able to shoot twice the arrows in half the time if I don’t have to keep backtracking. All you have to do is make your matches in a more geo-centric manner.”

Venus held up her manicured hand.

“When I want your advice I’ll ask for it.”

“Mother, please. I’ve given a lot of though as to how we can modernize, maybe even….”

Venus stared at her son, who was looking back at her with eyes the color of Lake Cuomo. He opened his mouth again, revealing the slight chip on his front tooth. It was the only flaw on his perfectly proportioned face.

“I don’t want to hear any more of this nonsense. Where are your arrows?”

Cupid shook his head in disgust and tapped his foot impatiently against the floor, whose planks were made of wood imported from Italy.

Cupid pointed at the monogrammed leather case lying against the wall, beneath the portrait of Venus that Remus had commissioned after she’d matched up the first inhabitants of Rome. Light glistened off the tips of the golden arrows poking out of the top of the quiver.

“Now listen to me. I want you to shoot this Amelia with the most powerful arrow you’ve got.”

Cupid began to leaf through the stack of papers.

Enjoy what you read? Want to know what happens next? Follow these buy links to find out! Buy links: Astraea Press, Amazon (paperback and eBook), Barnes & Noble

Thank you for stopping by and reading!