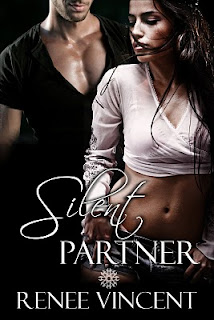 Today I am so excited to share with you Renee Vincent's latest release, Silent Partner. What looks to be a very sexy read! So take a moment and check it out! :-)
Book Specifics -
Genre - Contemporary Romance
Length - Novel (156 pages)
Heat Level - Sensual (3 of 5)
Sexual Orientation - M/F
Content Warning - Not suitable for audiences under 17

Blurb -
Grayson Anders has it all. He’s the co-owner of a happening nightclub in downtown Boston, he’s wealthy, and women practically throw themselves at his feet the moment he steps on the dance floor. But profiting from these obvious benefits is not his desire. His passion is dancing and he wants nothing more than to find the perfect dance partner.

Chloe LaRoche is a talented artist, but a failing entrepreneur. Her once thriving studio is now on the brink of foreclosure and unless she paints the next Van Gogh Starry Night, she’ll have to cut her losses and say goodbye to her quaint little gallery. Fearing her career is at an end, she drags herself to the local hot spot, determined to drown her worries in the bottom of a shot glass. At least that was the plan…until she lays eyes on a wickedly sexy, swarthy dancer in the club—Grayson Anders.

Unable to resist, Chloe finds herself in Grayson’s arms, indulging in a passionate, out-of-control, one night stand. And when they awaken the next morning, they are both consumed with inspiration.

Grayson finds his perfect dance partner and Chloe finally finds her muse. But, will her secret destroy both their dreams?