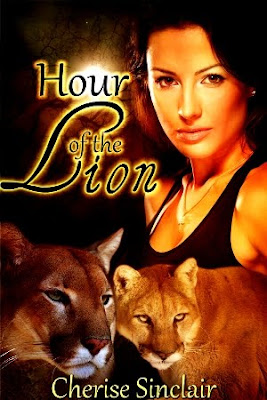 During her investigation, she finds a real home and friends for the first time. Sweet, right? But there's a flip-side: the bad guys are waiting for her to turn into something four-legged with a tail, the shifters suspect her of spying, and she has fallen in love with a pair of Thumper-eating werecougar brothers.

Her duty is to expose their existence. Or she could follow her heart and protect them with all of her deadly skills.

Excerpt -
The redheaded guy from the parking lot smiled at Vic. “So miss…” He leaned in and ran his hand over her butt.

Not a chance. She slapped his arm away and gave him a look that should have fried him in his shoes.

They walked away, leaving her standing alone by the door. A second later, she realized that a lot of men were looking at her. Assessingly. Oh, fuck. Time to leave.

Too unnerved to take her eyes from the room, she groped behind her for the door handle. A big hand closed on her fingers.

“A little out of your element, Ms. Waverly?” Alec slid a hard arm around her waist.

Unable to resist, she turned into him. His other arm went around her, and he curled his fingers under her butt, squeezing and pulling her up against his thick cock, lifting her slightly so her pelvis slid down against the hardness.

“Alec.” Her voice came out husky.

His face was flushed, and his eyelids heavy. “You really, really shouldn’t be here,” he said and took her mouth as if he’d been doing it for years.

Everything inside her burst into flame as his tongue swept in, dueled with hers. He leaned in, pinning her against the wall. As his broad chest crushed her breasts, she gripped his shoulders, reveling in the rock-hard muscles under her fingers.

“To hell with common sense,” he muttered. He slung her over his shoulder like some demented cave man.

“What the fuck?” She thumped him with her fist.

He made a chortling sound. One big hand squeezed the back of her lower thigh to hold her in place. His other hand slid high between her legs. She could feel the heat of his fingers so close to her sex, igniting a burn. His finger stroked over the crotch of her jeans, and she wiggled uncontrollably. He laughed.

As he climbed the stairs, people brushed past them. She heard husky laughs. When a man ran his hand down her leg, she felt rumbles under her stomach as Alec growled like an animal.

An animal? She stiffened. Wait.

He walked down the hall into a small room, bent, and dropped her. She fell onto softness. Pushing up, she realized that silky green cushions covered the floor. A fireplace sent out heat and enough light to see Alec’s expression.

Alec looked down at Vicki as she pushed to a sitting position. He hesitated. Sex with a human. Sex with a human during a Gathering. This was a bad idea. It shouldn’t even be happening, dammit. Daonain weren’t attracted to humans.

But as his head explained everything to him quite clearly, the scent of her arousal wrapped around him, heating his blood, and urging him to possess her, take her. Now.

He’d already had two females, but it didn’t make any difference. Not with his Vixen sitting like a prize, right here in front of him. His cock hardened until it pulsed with every heartbeat. Logic lost out to the animal inside him.

He dropped to one knee to take her mouth again, and her soft, full lips opened for him, her tongue twining with his. He took her breath in, gave her his, then pulled back long enough to kiss down her neck to the curve of her shoulder. By Herne, the little sounds she gave, deep in her throat, were going to kill him. Wanting—needing— more, he undid the top buttons of her jacket.

Her hands closed on his arms as if she wasn’t sure whether to pull him closer or push him away. Holding her gaze with his, he unhurriedly opened her jacket far enough so his fingers could trace the edge of her bra through her shirt.

Her breath hissed in, her eyes going unfocused. Her scent intensified, fragrant, compelling. Overwhelming. Hell with it. After shoving to his feet, he ripped his shirt off. A hail of buttons thudded against the wall. She inhaled sharply, but her golden gaze never wavered from his body. He flung his shoes and pants to one side and knelt beside her on the cushions.

She willingly moved into his arms, all female and fragrant. Her long hair spilled over his skin in a silken kiss. Oh, yes.

“I know,” he murmured, burying his face in the crook of her neck where her scent was strong and wild. He bit the muscle there, lightly, laved it with his tongue, bit again. “But right now, this minute, you’re mine.”
Curious to know what happens next? Head on over to Amazon to find out!
Thanks for reading!
Elaina
Posted by Elaina Lee at 6/23/2011 06:30:00 AM