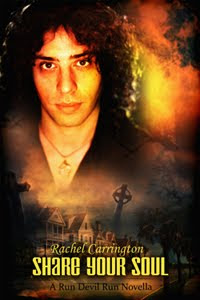 I just love the eerie feel of this cover and the attention grabbing colors. :-)
Book Specifics -
Genre- Paranormal Romance
Length - Novella
Heat Level- Sensual (3 of 5)
Sexual Orientation- M/F
Content Warnings-
Blurb -
On the fifth anniversary of my murder, I took action against inaction. I set out to find what I wanted the most—revenge. Others warned me that the whole project could be risky, but getting even with my killer husband seemed worth the danger. Turned out, I made an appointment with the Angel of Death. Perfect.

I’ve always had a weak spot for bad-boy, rocker types but Gabriel the bad-boy angel surpassed my fantasies. He looked like Bon Jovi in his long hair days, which destroyed my ability to concentrate. Plus, he claimed he could help me only if I trusted him. The last man I put my faith in shot a bullet through my heart. How the heck could I trust the Angel of Death?

So anyway, I told Gabriel that I needed retribution before I could move on. He granted me three days in a mortal body to gain closure. Great offer except for one thing—my dear husband had already been found not guilty so he couldn’t be tried again. No hope of ever putting him behind bars…at least not for shooting me. I also had no idea where the loser had dumped my body. How was I supposed to get vengeance?

After that, things got really complicated. I had to find dirt on my jerk of a husband while placing my faith in the Angel of Death and ignoring the forbidden things he did to my phantom heart and loaner body. Yeah, the whole situation sounded weird to me, too, but what was a misplaced spirit to do except roll with it?
Excerpt -
The man moved with the grace of a jungle cat, all muscle and strength. He waved toward a chair, the only invitation to sit.

I didn’t know his name or much about him, but I did know I was in no hurry to leave. Those mesmerizing green eyes of his held my gaze, and I could swear he read my mind. Maybe he could. That brought a frown to my face. I didn’t particularly care for the idea of him strolling through my brain at will, especially when I’d never been that good at controlling my thoughts.

“Who are you?” I blurted the question out before I could engage my brain. I’d always been guilty of speaking first and thinking later. Apparently, my death hadn’t changed that.

“You mean you don’t know?” He sat behind a black circular desk, folded his hands across the top. “Most people know a little about me before they requisition a meeting.”

Starting to get nervous, I lifted a shoulder in a half-shrug. “I didn’t think I’d ever need to come to see you.”

“Aren’t you going to tell me who you are?”

One dark eyebrow arched. Here was a man not used to being questioned. “My name is Gabriel.”

If my heart could beat, it would pop out of my chest. “You mean like the archangel?”

He laughed, the vibrant sound echoing around the vast space. “Wrong angel, although, I do admit it’s not the first time someone has mistaken me for him.”

I was getting irritated. I didn’t have time to play games. Well, actually I had nothing but time, but the longer I waited, the longer Blake had to enjoy his perfect little life. “Okay, fine. You don’t want to tell me who you are. At the very least, you could tell me what makes you so special. Every spirit above thinks you’re the best thing since fresh pineapple.”

Gabriel wore a smug smile that made me wonder if spirits could harm angels. “No, you definitely did not do your homework.”

“I was never any good at it.” My retort earned me another laugh.

“Olivia, my sweet, I am the Angel of Death.”

Like what you read? Want to know what happens next? Go to Decadent Publishing to find out!

Thanks for stopping by!