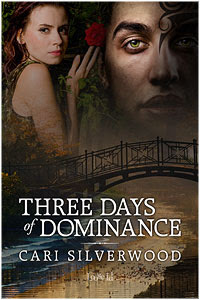 Her wrists were drawn taut above her head, secured to the headboard by ropes of thorned red rose and bougainvillea. The pricks of their thorns threatened to puncture her dream. She resisted that, wanting more. Raising her head, she stared down the length of her body, past her protruding red nipples and along her stomach where sweat lined the floral rope fastening her thighs up against her body. With her bottom tilted and her legs spread, her pussy was open, available.

The man, his black hair floating like the rays of a sun, lifted his head from between her thighs. She gasped, rolling her hips upward. The wet tip of his tongue slid across as he licked her juices off his lower lip. Her clit, so recently probed by that clever tongue, pulsed. If he didn’t put it back there, soon…

She panted as his thumbs glided in the slickness down below, felt them sink deep into her, then deeper inside, and gasped again, lost in the molten sensation. She tried to move her arms, her legs and couldn’t. Trapped and pinioned for him to do what he wished. Excitement screwed her insides a notch tighter. Her vagina squeezed around his thumbs. He pulled them out, and she mewed at the loss.

Slowly, his eyes never leaving hers, he rose to his feet, shifting position until his hands wrapped around her thighs and the head of his cock pressed against her entrance.

Anticipation made everything feverish bright, sent lust snaking, thick as syrup, to her groin. Her thigh muscles juddered as she pushed up in vain against the rope. The rope tightened. The thorns bit down.

The man smiled with satisfaction as her struggling subsided, becoming a trembling acceptance of what was to come. He drove the head of his cock into her, sliding inside, and halted. She groaned, anticipating the thrust as he penetrated farther.

Watching her intently, he skated his finger in tantalizing circles about her clit, sometimes touching the aching nub and sometimes not. He gripped it between finger and thumb and squeezed, then thrust with his cock, then squeezed, then thrust -- the rhythm driving her closer and closer to the edge, her clit so swollen she was sure she’d explode if her release was held off a second longer. Withdrawing until the head barely parted her lips, he poised there, making her ache, making her want.

Aaah. She arched, threw back her head, opened her mouth…and something soft and furry landed on her. A long tongue swept across her face. The dream dissolved.

“Killer,” she rasped. Her cocker spaniel barked twice and squirmed closer. She plonked a hand on his head to still his tongue and squinted at the alarm clock.

“Six o’clock. Gah! Couldn’t you have waited one more minute? We nearly did it this time!” Not that it would have mattered. Her dreams always ended before she came, though this time had been close, much closer than usual.

Danii squeezed her thighs together and groaned. She really needed a lover. Only, good men didn’t grow on trees, especially not men who did special tricks with bougainvillea. Whoa, that had been something, way too kinky. She’d never let a man do that to her for real, but in dreams, in dreams it was…nice.

He ruffed and sat up, tail swishing across the sheets.

Getting her mind in gear in the early morning was something she’d had practice at for years. Within half an hour, Danii was at the lake, having pulled on jeans and a top and collected the neighbors’ dog like she’d promised. The lake was blue-green, cool, and still. The sun’s rays struggled over the horizon in little sparks and glints that hurt her eyes when she looked up.

Preoccupied by thoughts of what might await her at work later that morning, Danii barely noticed the concrete path under her feet, the ducks cruising on the water, or the myriad other life in and around the lake. She’d been here a million times, and the dogs more than made up for her inattention as they sniffed weeds, tree trunks, a patch or two of sodden grass, and eyed everything that moved.

Most likely there’d be a long list of thefts and assaults to investigate today -- no court appearances, thank heavens, as far as she knew. With a wrench she brought her mind back to the here and now. Time for all the stresses of work later, when she had to think about it.

Killer and Jugsy, the neighbor’s black-spotted dalmatian, easily kept up with her on the lazy walk around the lake, though the dalmatian had a habit of doing pretzel maneuvers around Killer every so often.

A distinctive child’s hat with butterfly appliqué rested abandoned on the grass ahead. She knew Marie, the mother of the child, and went to pick it up. Jugsy’s lead tangled with Killer’s at the same time she bent over, and she absentmindedly fiddled with the lead and dropped it.

In that one millisecond of sloppiness, a dragonfly darted across Jugsy’s nose, and he took off like a spotted rocket. She lunged, then dived for the loop of the lead and missed. With a gigantic splash, Jugsy plunged into the lake and was yards out before she’d scrambled up off the grass.

Holy hells. Who was to know the animal could win an Olympic medal in dog paddle?

For a Friday morning, the park was inexplicably deserted. No one in front of me and -- Danii looked back along the snaking path of gray concrete -- no one behind. Just a carpet of grass up to the lake edge, low shrubs spotted here and there either side of the path, and a few timber seats randomly decorated with pigeon droppings. And one very wet dalmatian, trailing his lead through the weeds and scaring up ducks and cormorants while galumphing around on the island in the middle of the lake.

“Damn.” She wrapped the end of Killer’s leash around her hand an extra turn and gave him a quick pat. “At least you’re not stupid enough to go swimming.” Tongue hanging out the side of his mouth, spaniel ears drooping in sympathy, Killer panted happily up at her, then turned to bark at Jugsy.

“Jugsy!” Damn, damn, and damn. It seemed a good time to curse everything. As well as exercising the dogs, she came here to wind down, to forget things like the maniac burglar the sergeant wanted caught ASAP, the avalanche of paperwork on her desk, and the niggling headache that came with it. No way was she getting in that weed-infested water, tangling her legs and drowning because her neighbors’ dog had decided to go nuts.

But…she couldn’t leave him. He might be so dumb a lobotomized weevil could beat him in an IQ test, but he was adorable. She looked down at her jeans and low-cut red T-shirt. Jeans weren’t swimming gear -- get them wet, and she’d find it hard to stay afloat. The alternative was to strip them off. No. No way am I stripping off in public.

She shucked her flip-flops and inched her toes closer to the murky green water. In the depths, something flash-wriggled past. Give her a recalcitrant criminal and she’d leap in with handcuffs flying, but this -- no way. Water, deep water, that went down into green depths…it was enough to give her a serious case of the heebie-jeebies. She stared, feeling a prickle of anxiety that she knew was only an eyeblink away from becoming full-blown, mind-churning panic.

Liar. Any water made her want to cut and run.

“Need a hand?” From behind her came a deep voice with enough gravel in it to finish her driveway.

She jumped, stepping back at the same time as she swung to see who’d spoken. Her heart pounded ten times faster than it should. As she peered out through the swathe of hair across her eyes, the sun made gold and red haloes on the strands of auburn. Calm down, girl, it’s just a man.

She snagged back her hair. “Hi. My friend’s dog is stuck on the island.”

Reality shifted abruptly, and her stomach twisted. She knew him -- he was the man from her dream fantasies for the last year. The resemblance was unnerving. Keeping her face from showing shock was a struggle.

If she talked fast, the man might not notice her blush. In her last dream, she’d been naked and tied to the headboard.

As if he could read her thoughts. Dreams were just…dreams.

He stood there, dripping wet, as sleek as a well-dressed seal, in skin-hugging black pants and a long-sleeved shirt that looked to be made of something like thin neoprene. He’d been swimming? His jet-black hair was tied in a ponytail. He was a little on the thin side for her tastes, and his irises were an odd color that was almost as green as the grass under her feet. Contacts, surely.

It was hard not to stare. Where had he come from?

He smiled. “Would you like me to get the dog back?”

Ooh. His voice went deep enough to turn her bones to jelly.

Killer gave a halfhearted woof, then wagged his tail. A guard dog, he was not.

“Uh. Um. You’d do that? I mean…” She tore her gaze away. “Look at it. There’s weeds in there that could pull you under.” She tucked her thumbs in her belt loops -- only to realize it made her breasts push out. Casual-like, she unhooked her thumbs, then threw out some words to cover her embarrassment. “Are you trying out a scuba tank or something?”

He took a step closer. “My name is Heketoro. I will do this in return for one gift.”

A gift? Surely he joked? But the man said it straight-faced, looking down at her with those green eyes, and she noticed for the first time a tiny, undulating tattoo on his temple. Her throat tightened, her heart shifting gear into full speed ahead. Not from fear, though; she knew that feeling. Desire. Her body was telling her something she didn’t want to know, and it was all the fault of those stupid dreams.

He hadn’t moved at all. He was serious? Okay, she could hear others talking now, farther along the path where houses crowded in toward the lake; besides, how crazy could this Heketoro be?

“No. You will do as I bid you for three days,” he said quietly.

Whew! *fans self* Want to read more? Follow this link to the publisher to purchase and find out what happens next! LooseID

Thanks for checking out Cari's excerpt!