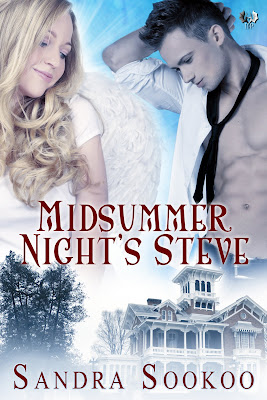 Please welcome Sandra back to my blog as she shares her latest release! She's also giving one lucky commenter (from yesterday and today) a chance to win something from her backlist and book swag plus an exclusive Tooth Fairy pack containing "fairy dust" and a Tooth Fairy "coin". Leave your email address in the your comment to be entered!
Book Specifics
Genre - Fantasy/Paranormal Romance
Length - Short (20k)
Heat Level - Sweet
Sexual Orientation - M/F
Content Warnings -
Blurb
She's not your grandma's Tooth Fairy.

Three months have passed since Steve Compton's last visit to Crystal Falls. Now he's back, but far from pleased about it. Convinced there is more in the air than clean living, he's a journalist on the hunt for a story that'll launch his career into the stratosphere.

Zoe Nickles loves the small-town atmosphere, the people, and most especially the great hiding places in Crystal Falls. She's heard rumors about the magical aura in the tiny town, and when her powers come to fruition one June night, she knows the whispers are true. She's the Tooth Fairy--with a sexy new look!

But there's a problem: a nosy reporter is on Zoe's trail, with just enough street smarts and cynicism to thwart her ability to practice her newfound skills. Can she convince him Crystal Falls is harmless before he tells the world about the town's "unique" quality, or will Steve blab the news, putting Zoe and all the paranormal residents at risk?

“Damn it, Compton!” The editor-in-chief’s roar could break the windows. “If you can’t bring me a better story than this, you can forget about working here.”

The door slammed, ruffling Steve Compton’s brown hair. Fighting the urge to drill his fist through the wood, he stalked through the busy newsroom to his desk. He heaved a frustrated sigh and flung his tall frame into a rolling chair as he scowled at the field reporters. They were bent over their own desks, no doubt working on exciting pieces of actual news--the types of stories he should be doing.

But no. He destroyed any chance of being taken seriously as a field journalist three months ago by falsely--and very publicly--accusing an ordinary citizen of being a leprechaun.

By some miracle, he’d managed to keep his job, only now he was stuck in sports-reporting hell and probably would be forever thanks to the editor, who hadn’t been amused by the Steve’s claims. He’d given Steve strict orders to only do the play-by-plays and never to attempt anything else unless invited to do so--which would never happen again as evidenced by the most recent tirade. There were only so many games a man could cover before wanting to beat himself senseless with a baseball bat. Steve aspired to something greater than rattling off numbers and statistics or reporting about steroid abuse. He wanted a byline that meant something, one people would actually remember two minutes after reading.

The answer was obvious. He needed to return to Crystal Falls, Indiana--the place of his humiliation, the scene of the crime, so to speak. He’d felt something weird in that town, and no one could convince him it was just his imagination or the result of too much alcohol. There was a story there. He’d bet his next two paychecks. It would be huge. He just had to find it.

Redemption would be sweet when he had the scoop of the decade.

Sorry it's not longer than that, but since the story is short, you'll just have to pick it up! This is book five in the Holiday Magic series.

Will soon be available on ARe, Amazon and Fictionwise.

Good luck in the contest and thanks for stopping by and checking out Sandra's fun and unique story!