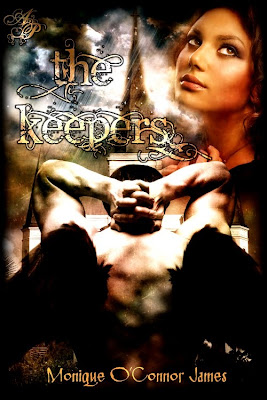 Please welcome Monique O'Connor James to my blog today! Before we get started, tell us a little about you: Thanks for Having me Elaina, I feel so priveldged to be on your blog! I'm the mom to two beautiful kids, a nine year old girl and fourteen year old boy and i married my high school sweet heart. By day I sell insurnace and of course, by night and I do mean late into the night, I write!
Oh me too! 10 PM? What's Elaina doing? Writing... *grin* The Keeper's is your first published story, correct? Nothing but praise and awesome sales has accompanied this book, so I must know, was Astraea Press the first publisher you sent this story to? Not exactly. The Keepers was the first novel I attempted to write three years ago. It started out with another title - The Fallen. However, there were several books which came out with that name and I changed it. While it was still The Fallen, having no experience what so ever, I sent it out to a few agents and collected rejections. In the mean time, I became friends with several writers and learned tons from them. There were a few scenes in the book that I never liked and never felt comfortable with and after learning a bit from the pros, I revamped a good bit of it. That's when I finally decided to send it to Astraea and got the contract with them.
I know I work for Astraea, but I'm still curious to know, why did you choose a new publisher to publish with? What made you decide to take a chance? I was excited when I first heard about Astraea. There were a couple of reasons I was drawn to them. The first being the guidelines on clean romance, and the second was that they were a new publisher. I felt like I was starting out in the business and a publisher who was new and growing would be more patient and more apt to explain things as we went along. I've worked for corporations before and gotten lost in the shuffle becoming just a number on a spreadsheet. I think that experience has always made me lean towards being invovled with the growth of a company rather than coming in when they are already successful and disappearing into the background somewhere.
Your charity novella, The Mulligan Man looks like a must read (for a sneak peek at Monique's next book, be sure to stop back by my blog on Friday!), how did you come up with such a unique premise? I have to say The Mulligan Man is right up there with the most fun I've had writing. I had a dream one night - and in true dream form I just appeared in a strange front yard near a street screaming "I want a do over! I want a mulligan!". My husband appeared in the dream, but he was a sixteen year old and I was devastated and wanted my own "mulligan" so we would be the same age. The next day I told a few friends about it and we kicked around the idea until we came up with the character The Mulligan Man. I originally was going to write an adult novel, but my fourteen year old son sat down with me and came up with the characters (the only plotting I've ever done) and we discussed a possible premises. About that time Astraea put out a call for the Japan Relief novellas and that's when I decided it would be a short.
That's awesome! So far, all your stories have taken place in your home state. Were you born and raised in Louisiana, or did you move there and just fall in love? Do you plan on all your future stories taking place there? I was born and raised here! I can't really say why I developed the passion I have for my home state, but it's always been there. I think the variety of people, heritage, music, and the beauty has enthralled me since birth. I do have six or seven manuscripts laying around waiting to be edited and they are all in set in Louisiana save two which are set in Florida, but they eventually visit Louisiana. I can't say I'll always write about Louisiana, but I can tell you there is enough variety here, and my love of the place is so strong that there will surely be more.
What is your favorite part of the writing process? Your least favorite? My favorite part is writing! When I'm finished with a story I go through a little grieving process, because the actually development of the story and characters is done. At one time, I would have said editing was my least favorite, but I've learned so much and continue to learn, and now I really don't mind. Marketing is the hardest part for me currently. I think when I get more comfortable with it, I will feel more at ease.
Ugh, let's not discuss marketing... Your success has been amazing though (congratulations!), what tips and tricks do you have for other authors? I have a goofy grin on my face. I didn't realize my success was amazing. I'm hard on myself and never think anything I'm doing is up to par. I would say make friends and be excited. Excitement is contagious, if you are excited about your work, then the people who come in contact with you will catch your enthusiasm. Make friends and be geniune. Sometimes it's hard to take the time to enourage and back other writers, but generally people remember when you help them out.
Thank you so much, Monique! Let us know where else we can find you:
Twitter: mjames13
Wordpress: www.moniquejames.wordpress.com
Website: www.moniqueoconnorjames.com
Facebook: https://www.facebook.com/profile.php?id=511255176
Author Page: https://www.facebook.com/pages/Monique-OConnor-James-Author/151581321573144
Be sure to stop back by tomorrow to read an excerpt from Monique's hit novel, The Keepers!
Elaina
Posted by Elaina Lee at 6/27/2011 06:30:00 AM