R-rated Excerpt from Written in Blood, by Elaina Lee 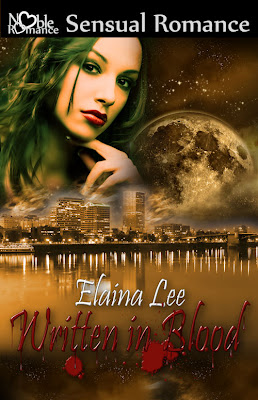 Please note: The following excerpt is graphic in nature and is considered rated R, and is only suitable for audiences over the age of 18.
Book Specifics -
Genre - Romantic Suspense
Length - Novel (87k)
Heat Level - 3 of 5 (sensual)
Sexual Orientation- M/F
Content Warnings -
Blurb -
Lyndi Crisdean is assigned one of the hardest cases in her career as a defense attorney. A serial murder case. Investigating is Alek Trevian, the lead investigator for the district attorney, and a handsome and supremely dangerous man. Lyndi finds herself in over her head when she chooses desire for Alek over common sense. If they're caught, Lyndi will lose everything she's worked for. Circumstances beyond her control pull her toward Alek, for he turns out to be the only one who can help when threats start to mount against her.

Lyndi may be the key Alek needs to bring down a murderous cult running loose in his city. When her beach house is broken into and a man begins to tail Lyndi, Alek can't help but reason Lyndi may be next on the cult's hitlist. The question is, will he discover the identity of the cult, keep her safe, and still win the case against the serial killer she's defending, all while losing a battle against the strong, untamable desire she alone ignites within him?

Written in Blood is the winner of the 2011 Golden Rose Award for the best Romantic Suspense.

Thank you for reading!