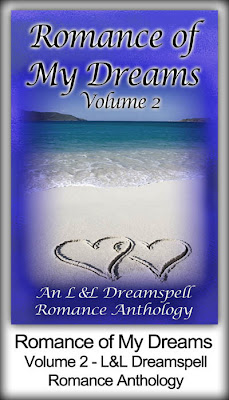 Please welcome Helen Henderson to my blog as she introduces us to her story within the Anthology, Romance of My Dreams, Volume 2. I was supposed to feature Helen back on April 28th, but as you all know, my grandmother passed away that Monday (the 25th) and I was not blogging at the time. Thank you to Helen for understanding, and thank you to everyone for stopping by and checking out her story!
Book Specifics -
Genre- Romance (include contemporary and science fiction)
Length- Novel (62k)
Heat Level- 1 to 3 (Sweet to Sensual)
Sexual Orientation- M/F
Content Warnings -
Blurb from Helen's story - From the World of Tomorrow - Recov

Eric Marten just had his deepest wish come true. He has the government's permission to create a child with the woman of his dreams, Lauren Woods. There is just one problem--she's a recov. Woods is one of a select group of the world's most talented and intelligent who died before their time. Brought back to life, a recov has 96 hours to create a child with the perfect genetic match selected for them by the government. Eric and Lauren must deal with the consequences when romance flowers between a living male and a re-animated female.

A twitch of Eric Marten's fingers and the velvet ribbon fluttered to the floor. Unfettered, the parchment unfolded into a blaze of gold and scarlet lettering. His prayer that the summons was a prank vanished within a heartbeat. The message slipped from his nerveless grasp to drop to the floor as a voice intended to freeze anyone within hearing range emanated from within the elegant communication.

"Eric Marten, the Genetic Selection Board has chosen you. Congratulations! Only a few perfect males receive this honor."

Marten wanted to slam his door shut and hide. But the subsonic orders in the note had done their work. He could not move.

"Mr. Marten, you will accompany me to the recovery center."

The command pulled Marten's gaze from the certificate on the floor to the speaker. Although he had never seen one other than in a tri-di newscast, the 25-year-old recognized an android. Unlike the court pages of ancient times who would have delivered an imperial summons, the Genetic Selection Board enforced its demands with a trio of heavily-armed robots.

A shred of intelligence pierced the shock. Survival instincts, long forgotten since childhood, surfaced. "I've got to pack some things," he stalled.

Anything you need will be supplied, the android responded, the inflectionless tone somehow harsh and demanding. "Please come, now!"

Other Authors contributing to the anthology -

Cal Pardue and his grandfather have taken care of each other just fine without any women in their lives, until Hurricane Katrina destroys their house and forces them to live on their crab boat. When Amos has to go into a nursing home after a hip injury, Cal is suspicious of Jasmine Gregory, the beautiful but annoying social worker who takes a shine to his grandfather. When circumstances throw Cal and Jasmine together on the boat in the middle of a storm, they discover their animosity stems from a mutual attraction neither of them wants to admit.

Son of a Sheik by Pauline Baird Jones

Ellie fell in love with the son of a sheik and he broke her heart. Now he's back, but its not just her heart at risk now. She's raising her niece, Emma, who needs to be first in Ellie's life. Everyone knows that sons of sheiks are first in everything…

Marrying a man she'd met once was a bad idea. When the guy was ET it was insane—even if they were anatomically compatible. He and his world weren't just outside her comfort zone, they were outside her comfort universe. And if he didn't have amazing green eyes, saving her father's career might not have been enough to get her through the wedding.

The View from the Balcony by DK Christi

Racing across the surf, the young woman on horseback with flowing blond hair, was a ghostly apparition, bent on drowning in the sea. He questioned his own eyes when he saw her. No one lived on this rocky Italian Coast where he hid from his own demons. A timely rescue opens a story of torn lives mended by love's magic.

After Jaycee Stevens manages to escape her alcoholic father by getting a college scholarship, she’s determined to concentrate on becoming a journalist and forget about love, but she’s tripped up by a poor little rich boy named Bud Stanton. Bud hides in a bottle like Jaycee’s old man, he’s arrogant, selfish and everything she despises in a person, and she wants him more than she’s ever wanted anything. Can these two flip sides of the same damaged coin stop fighting long enough to find out if they have a future together?

Sara is a lonely widow whose life has lost its meaning. Her regular bus trips to Atlantic City are what keep her going. But Sara is not a gambler. Rob, a construction worker, was recently laid off his job. They meet on the bus and a bond forms between them, two lost souls in need of comfort and companionship. For them, the excitement of casino life ignites romance and hope.

The Right Feeling by Phyllis Humphrey

Just when Megan finds both a new romance and a buyer for her old, picturesque Hawaiian hotel, she discovers someone has sabotaged the deal. Was Bart to blame or will their love solve her problem?

Manless and Loving It by Lisa Rene' Smith

Samantha Thomas did not need a man. She didn’t want a man. Men did nothing but carve out parts of her heart. She loved her life and was ready to embrace the saying, Life Begins at Fifty. Of course, we don’t always know what we want…or who we need.

For quite some time, Angie Deacon considered Detective Colby Jarvis one of the sexiest men in town. But her recent divorce soured her on men. When she’s forced to call him because of a break-in at her community theater, they’re thrust into each others’ arms. Should she bend to his knee-wobbling kiss? If she does, will she fall?

Wow, lots to read there! Want to more about Helen's story and the others? Follow these buy links and discover them all! All Romance, Fictionwise, Kindle, Amazon Print,

Email ThisBlogThis!Share to TwitterShare to FacebookShare to Pinterest
Labels: Excerpt from Recov, Excerpt From The World of Tomorrow, Helen Henderson, Romance of My Dreams volume 2