Hawthorne - The Backstory, by Sarah Ballance 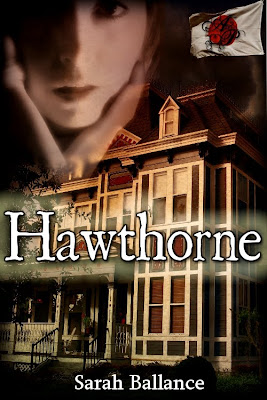 Please welcome Sarah Ballance to my blog as she tells you about her inspiration for her absolutely amazing paranormal romance, Hawthorne.
If you haven't already read Hawthorne, or know about it, you're in for a treat. All the proceeds from Sarah Ballance charity short story go to benefit the victims of the Japan earthquake. So be sure to check it out!
Now, without further interruption, Sarah Ballance!
Hawthorne - The Backstory, by Sarah Ballance

When Elaina approached me about writing a short story for charity, I very politely ignored her for a good day, maybe two. (And she noticed, too, LOL!) Honestly, I didn't know what to say. She totally had me on the charity aspect, but short stories and I do not get along. I'm a new author, but moreover, not a reader of short stories. I didn't feel I had the experience to create a compelling story readers would care about in the space of 10,000 words, and I'm too slow a writer to have even thought about trying to make it longer. As for a plot that would hold interest and not be too much for a short? I had nothing. But the deadline was an utterly harmless two months away, so I told Elaina I was in.

Then a month passed, and I panicked.

With no choice but to do it, I started writing. About 500 words in, I stalled. I liked my beginning but had no idea where to go with it. Then, in the midst of my woeful "What was I thinking?" babbles, my husband made a simple suggestion: write a ghost story. He probably has no clue how brilliant his words were—even I can't explain the impact—but with them something clicked in me. Shortly thereafter, the end of HAWTHORNE hit me like a truck. At that moment, I was 100% sold on this short story gig.

But … I still needed a plot. The aforementioned husband had to sit through another round of "AK!" before I pieced together the rest of the story. (I'd like to give him more credit here, but I'm pretty sure he did the "smile and nod" thing—lucky for him, it sufficed.) Once I went back to the beginning and tweaked it to meet that end, the rest of the words just flew. (Then Elaina plucked me in the forehead over a couple and I had to fix them, but they were stellar changes she called for!)

As for the conclusion of HAWTHORNE—the true inspiration behind the whole story—it may be an understatement to safe to say it draws a strong reaction. In that sense, I think I accomplished my goal of reaching readers on a personal level. What I didn't expect was the one or two (thus far) ready to hunt me down, pitchforks in hand, but clearly they connected with my characters and—thanks to those pitchforks—I have the scars to prove it. And that … that's inspiring.

Want to know what happens next? Make your donation now to find out! Astraea Press

I'm over at Sarah's blog today sharing the inspiration behind To Urn Her Love as well! Be sure to swing by! Sarah Ballance's Blog

Also, as part of Sarah and I's blog tour, your comment qualify's you for an entry into our contest to win a $10 gift card from Amazon or Barnes & Noble. Also, if you've purchased either Hawthorne or To Urn Her Love, Sarah and I have a special thank you gift we'd like to mail you for FREE! Just send either of us an email.

Thank you so much for your support!

Email ThisBlogThis!Share to TwitterShare to FacebookShare to Pinterest
Labels: about Hawthorne, Hawthorne, Sarah Ballance, the inspiration behind Hawthorne