Hawthorne's Cover - What I Expected and How I Reacted - Sarah Ballance

As we continue our efforts to bring attention to our charity short stories, I have with me again, Sarah Ballance. Get used to her awesomeness folks, she's pretty much going to dominate my blog for the next couple weeks! I am thrilled with this, I hope you all are too. Remember that every comment you leave on my blog, Sarah's blog and any other blog we hit in our tour, counts as an entry into our contests for $10 gift cards. This weeks gift card is to Barnes & Noble. The more you comment, the more entries you receive!
Please welcome once again - Sarah Ballance -
The Cover Art for Hawthorne - What I Expected and How I Reacted -
by, Sarah Ballance 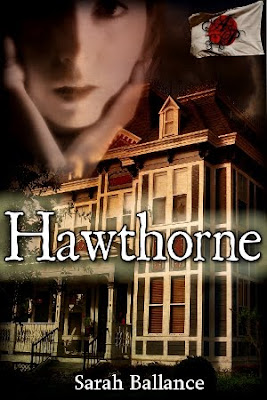 When it comes to cover art, I tend to draw a blank. HAWTHORNE was no exception. By the time I finish writing a story, my characters exist in the emotions and events they bring to the page. That's not something that's easy for me to explain. You see, it's not about "brown hair and blue eyes" … it's a about expression and heart. Before I careen onto a road of utter schmuck-dom, however, I'll backtrack somewhat to say one thing about HAWTHORNE: I knew it was about the house.

I had this haunting, epic image in mind, but floating offshore of my conscious thought this blurry picture was as useless to me as it was to poor Elaina, who had the task of creating my cover. Fortunately for me, however, Elaina had read the story. Less fortunate for her, my lack of concrete ideas meant she was on her own for this one. But that didn't stop me from dying to know what she'd come up with—even more so when I had a glimpse of a couple potential houses for the cover. As such, I obsessed a little.

And as it turns out, I obsessed just enough. I was at the pool with my kids, armed with my not-so-internet-friendly cell phone, when my obsession led me to check my email … just in case. (Both a lifeguard and my mother-in-law were on duty, plus my two youngest wore life jackets. No children were endangered in the feeding of this obsession). And naturally, there—in all of its postage-stamp sized glory—waited my cover.

PERFECT. It was perfect! All I wanted to do was go home and see it, but I didn't figure it would go over well to drag the kids out of the pool so I could check my e-mail. (Darn parental guilt!) Finally the time passed—hours that felt slower than labor, I swear—and I was able to pull it up on my computer. My first impression stuck: it was perfect!

When I think about it, the reason it fits so well goes back to what I said in the opening paragraph. It's about a feeling—the heart of the story you can't quite put into words. And when it comes to HAWTHORNE, Elaina captured that essence in a way that's hard to define. I think anyone who has read the story can vouch for that!

Woohoo, score one for the cover artist! *grin* Thank you, Sarah. My heart was pounding when I sent it to you, I breathed a huge sigh of relief when your super excited email arrived!
Want to know how I drew inspiration and chose the images for Sarah's cover and the cover for To Urn Her Love? Please visit Sarah's Blog to find out!!!
About Hawthorne -
Excerpt -

Want to know what happens next?! Follow these buy links, make your donation today, and find out! Astraea Press, Amazon.

All the proceeds for Sarah's short story, Hawthorne, go to benefit the victims of the Japan earthquake.