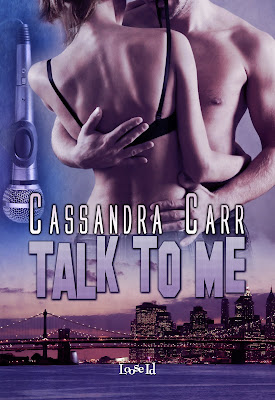 Morning my wonderful friends! I have Cassandra Carr here to introduce you to her novel! Please take a moment and check this fabulous book out!

Radio producer Jamie MacMahon is in over her head with ex-hockey player-turned host Drew Milan. She’s attracted to the man who earned the nickname “the Beast” during his playing days from the moment they meet, but he’s her boss and she loves her new job. She’s made plenty of mistakes with men and loathes the thought of being yet another plaything for Drew, a man who sleeps with women but doesn’t date them.
Drew doesn’t want to lose a great producer and knows Jamie deserves a real relationship, but can’t stay away from the sizzling chemistry they create every time they’re together. Jamie’s insecurities and the very real prospect of having to leave a great job if this thing doesn’t work out, coupled with Drew’s fears about opening his heart and the possibility of losing his first competent producer clash.

By the time the show ended and Jamie thought about how long it would take her to shut everything down for the night, then hustle herself off to the subway station and take the three different trains to get to her apartment all the way out in Brooklyn, she was truly afraid she would self-combust.

Drew ran out of the place like a bomb scare had been called in, so at least she didn’t have to worry about him anymore. Nonetheless, Jamie waited a good ten minutes past when she was finished with her nightly duties, then made her way back to the small production room where she and Drew had recorded his promo earlier. She knew a copy of it would still be stored on the computer in the room, and after scooting in and shutting the door, she booted it up. She told herself she needed to check it one more time before giving it to the station manager tomorrow, but who was she kidding? She needed to hear him but in a safe environment. Where she couldn’t do anything stupid. She needed his voice to weave inside her, through her, like a drug.

The rough yet strangely melodic sounds of Drew’s voice drifted over Jamie as she leaned back in her chair. Closing her eyes, she pictured his face in her mind -- his to-die-for lips traveling down the length of her body, just as her hand was doing at the moment; his navy blue eyes, focused only on her as he brought her to orgasm… She reached the button of her jeans and eased them open, propping her feet up on the desk.

She couldn’t believe she was doing this at work, but no one was around, and if she didn’t do something to assuage this ache, she was likely to jump him the next time she saw him. Bad idea. Bad, bad idea. Fantasizing about the man was one thing; straddling his powerful, muscular thighs in the studio chair and offering herself to him was another. That thought brought another rush of heat to her pussy, and she moaned. She needed serious help.

At first she just teased herself a little, rubbing outside her panties, but it soon became too much. She needed relief too badly to continue to torment herself. As Drew’s voice continued to assail her from all directions in the small, windowless room, she pushed her hand down inside the waistband of her panties and through her curls until she found the damp center of her sex. The sweet smell of her musk wafted up to tickle her nose, arousing her even more.

Twirling her fingers as much as the constricting position allowed her to, she imagined they were Drew’s tongue instead. She let out a plaintive moan as the picture caused her juices to flow even more, soaking her fingers. Plunging two of them into her pussy, she pressed her thumb on her clit, craving the direct stimulation. Jamie gasped as shock waves of pleasure shot from her pussy through her clit and up her spine, her back arching. And through it all, Drew’s voice urged her to new heights.

Like what you read? Want to know what happens next? Follow this buy link to find out! Talk to Me - Loose Id

Thanks for checking out Cassandra's book! Hope you enjoyed!