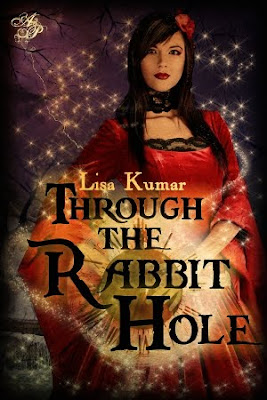 Welcome to Excerpt Thursday! Please take a moment and check out this awesome novella by Lisa Kumar!
Book Specifics -
Genre - Fantasy Romance
Length - 23k (novella)
Heat Level - Sweet
Sexual Orientation - M/F
Content Warnings -
Blurb -
Social worker Natalie Danvers never thought she would fall head first into her very own dimensional tear — straight into a fey lord’s lap. The handsome but infuriatingly vague Lorh insists she’s stuck in his land for three weeks and that only she can discover the reasons behind her appearance in TirAnn. Natalie’s convinced this is all nonsense until forgotten memories of Lorh and his siblings resurface and collide with reason. Just who and what is she to Lorh and his family?
Excerpt -
At one time, the flowering shrubs in the courtyard would’ve grabbed Natalie’s attention. But that was back home, where there weren’t any moving trees, so these had the honor of her perusal by default. Natalie didn’t know if they were ghastly or beautiful, with their limbs twining then separating. Snakelike. The comparison made her shiver. She didn’t much like snakes.

Still, the scenery gave her something to contemplate other than the person by her side. She could almost ignore the hand at her elbow, urging her forward. Almost ignore how her body became hypersensitive when close to him.

But not quite. Praying they drew near to their destination, she glanced up at the branches that overhung the flagstone path they walked on. Another shiver worked its way through her body.

“You do not like the trees and the other growing plants.”

She shook her head, her voice carried away by the conflicting emotions of fear and fascination. Whether those emotions were saved solely for the scenery, she couldn’t decide.

“What you see in this garden cannot hurt you.”

Meaning what was outside this garden could? The alarm that flared up at his choice of words must’ve flashed across her face, for he stopped walking. His hand slid up her arm, over her shoulder, and along her neck. The palm came to rest upon her cheek. The sensation… Natalie closed her eyes, only to open them when he made no further move. She searched his eyes, but he avoided her scrutiny.

Taking her hand in his, he gave it a reassuring squeeze. “Come, I want to show you something.”

As he led her toward a gardened area, she tried to ignore the tingle his touch gave her, so she settled for staring back and forth between him and the bush they neared. Once they stood before it, he drew their hands toward a branch. She swallowed the squeal on her lips and closed her eyes instead. A gentle caress against the backs of her fingers caused her to jump, her eyes flying open.

“Oh!” Glancing up at him, she sent him an inquiring look. Lorh shook his head, smiling and nodding toward the bush. Leaves tickled across her skin and made her laugh nervously. But when she caught him gazing at her, the laughter died in her throat. The emotion in his eyes... She couldn’t describe it as anything other than longing. But longing for what? Surely not her. He hardly knew her.

She self-consciously tugged at a strand of hair with her free hand. “What?”

She didn’t know how to reply to that. He was throwing her off balance, not that it took much since she was in a strange place. Some emotional distance would be needed for her to gain back what she’d lost.

But even as she stiffened her resolve, something coiled itself around her hand, causing her to gasp and pull back. It was a young green shoot from the bush.

He stilled her movement. “No, no. You’ll damage the delicate shoot if you pull away before it has time to let go.”

“Did I not say you were safe in my garden? Yes, truly it will let go.”

“Oh,” was all Natalie could mutter. Once she became accustomed to the sensations, being held hostage by a plant wasn’t so frightening.

“It is examining you, seeking to know you better through the only means it has.”

Lorh’s laugher rang throughout the courtyard. “Yes, I guess you could say that. My siblings exhibited that behavior when they were very young.”

“You’re that much older than they are?” She would guess him to be considerably older, though his appearance did not add to this impression. He could be anywhere from his early twenties to his early thirties, as he had that kind of ageless face that made time irrelevant.

“Yes, I am by far the oldest.” His tone brooked no further questions.

He blew hot and cold, his moods changing with an irregularity she couldn’t predict. She glanced down at her hand, wondering what to do next.

“Flick your fingers gently. It will loosen. Then you can pull away.”

She did as he said, and the shoot loosened, allowing her hand to slip away easily and her arm to fall back to her side. Not resisting the impulse, she flexed her hand. It moved like it should, the encounter with the shrub not leaving any undesirable effects.

“Your hand, it’s in one piece?” His teasing voice came from above her head. She spun toward him so quickly she nearly got whiplash, but halted when her nose almost hit his chest. Yikes, when had he gotten so close—and so tall?

He picked up her hand, which by now lay limply by her side, and made a show of inspecting it. “Your hand, my lady, is fine?”

She nodded wordlessly, watching as his hair slid over his shoulders and a few strands came to rest upon her hand. Air stilled in her lungs. The feeling of his hair on her skin was terribly familiar. But that had to be her mind playing tricks on her. Yes, that was it.

“Well, since you are unscathed,” he said, placing her hand on his arm, “let us continue on.”

Natalie followed him without a word, her mind too awash with conflicting emotions and thoughts to offer up any pleasantries. They walked for another minute or so, and she saw how rambling the place was that Lorh called home. He’d said it was a manor, but it resembled no manor house she’d ever seen in pictures. Low-lying buildings no more than a few stories high flanked the courtyard, which seemed to be at the heart of the layout. These probably served as housing. The one she’d come from certainly had. Each structure was connected to the next with covered walkways that would offer some protection from the elements.

She wanted to peek past those buildings to see what lay beyond. He’d made mention of a city, his city if she remembered correctly. Did that mean he was a lord of some type in this…wherever this was?

But if he was, where were the people? Though she’d been awake for no more than an hour or so, she hadn’t seen anybody other than Lorh and his sisters. But wait, Nara had mentioned servants. That she hadn’t wanted them to take care of Natalie. Figuring that maybe they were all busy with their duties, she put the matter away for now. Time and patience would show her the answer.

She frowned. Where had that uncharacteristic thought popped up? While not exactly impatient, she wasn’t blessed with an overabundance of that virtue, either. Especially not in a situationlike this. Her frown grew larger. This bizarre situation defied all explanation, so maybe it wasn’t a good measuring stick for her patience.

Shaking herself back to the present as they neared a terrace surrounded by creeping vines and latticework, she noted they neared their destination. The polished wood of table and chair gleamed in the sunlight. Various plates and dishes, emitting a tantalizing aroma, graced the smooth surface of the table.

One of her questions had been answered—a male servant stood by the table, apparently waiting for them. His heavy perusal weighed on her, so she stared back until his eyes snapped elsewhere. Were humans such a rarity here, or was it something else?
Want to know what happens next? Follow these buy links to find out! Astraea Press, Amazon
Thank you for checking out Lisa's story!
Elaina
Posted by Elaina Lee at 8/04/2011 06:30:00 AM