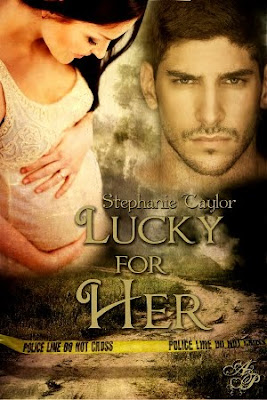 I get the awesome honor of introducing you to Stephanie Taylor's BESTSELLING novel, Lucky for Her. I will admit, I haven't read this entire story yet, but what I have, it's awesome!!! I'm waiting for my print copy (which should be here soon *taps foot, consults watch*). I hope you enjoy!

Lucky certainly lives up to his name. Once the fat kid in school, he's all grown up and taking prisoners, literally. He's the town sheriff and delights in handcuffing idiots. Most people barely recognize him being the fit and trim man he is now.

Lana, pregnant and alone, flees her abusive ex-husband and seeks refuge with her father in her hometown. She doesn't expect to meet a handsome man at a get-together and fall head over heels. Of course, she can't trust herself when it comes to men and she certainly doesn't trust Lucky.

Then Lana finds out who Lucky really is - the fat kid whose invitation she turned down for her senior prom. Fat Jack has now grown into a man that makes her burn inside. He even has a new name. Ashamed of the way she treated him in the past, she tries to walk away, but there's something that pulls her back to him.

Is it the fact that Lucky can protect her from her ex-husband or can love really conquer all?

Lucky O’Donnell chased hot on the tail of a white Honda.

“Pull over now, or I’ll shoot your tires,” Lucky announced over his loud speaker.

The car weaved over the double yellow lineon the two-way street, and the brake lights angrily glared at him in the near darkness of sunset. He screeched to a halt and readied his gun. His heart kicked into overdrive. After three boring years as sheriff in a hole-in-the-wall town, it was exactly what he needed to remind him of why he chose law enforcement as a career. Tonight, it wasn’t just parking tickets and spats between spouses.

A white-haired, scrawny man, wrinkled withage opened the door and moved at an impossible speed toward the ditch. Lucky was out of his patrol car in a flash.

Fear shone in the old man’s eyes and he held his hands up as if to surrender, but his feet kept moving. Did he think he was going to outrun him?

“I said freeze!” Lucky shouted again. He kept his eye on the man and finally started running in his direction when the man showed no signs of slowing down.

Lucky lost sight of the old man as he rounded the car, his gun still aimed. Cautiously inching, he peeked around the edge of the back bumper in a crouch and the sight—and sound—that greeted him caused bile to rise in his throat.

“I don’t care, officer,” the old man called. “Just shoot me.” There in the ditch, the old man squatted with his pants around his ankles, groaning.

Lucky cleared his throat but kept the gun carefully aimed at him, just in case this was a stunt. Although he wasn’t quite sure how it could be. “Keep your hands where I can see them,” Lucky said quietly.

“I have a colonoscopy scheduled tomorrow. I was trying to get home. The laxative’s working a little sooner than I expected. The pharmacist told me it would work fast, but I thought I had to time to run to the store for some toilet paper. I was getting low.” The man gave Lucky a sheepish smile, and with a grunt, an apologetic glance came his way.

Lucky grabbed his walkie-talkie and calledin the tag number of the Honda. After a few uncomfortable moments, the dispatcher called back that Mr. Gary Roche was clear. Not even a ticket on his record.

The name rang a bell. He cocked his head to the side and then he remembered. Lana Roche. Cheerleader. Goddess. Momentary love of his life back in high school. This must be a relative.

“Sir, you were trying to evade the police. I’m going to glance inside your vehicle. Are you hiding anything that I should know about?”

The man shook his head. From the looks of things, he wasn’t going anywhere any time soon. After a quick scan, the interior revealed a couple of hats, hospital papers, and instructions on how to prepare for a colonoscopy.

“Officer, I know I was speeding. I understand you need to write me a ticket. I’ll be happy to pay it.”

Lucky didn’t look in his direction as more grunts and sounds reached his ears. He didn’t know whether to laugh or cry. The man was obviously telling him the truth. That didn’t mean, however, that he could speed whenever he wanted.

“Not just speeding, sir, reckless endangerment. You were swerving all over the road at speeds over seventy miles per hour on a rural road. Children play in these areas. I should take you in to the station…”

Risking a quick glance in his direction, Mr. Roche stared back at him with sad, aged eyes. Forget it. Lucky didn’t have the heart to take him in.

“But I won’t,” he finished and turned to his patrol car. “Just consider this a warning. I catch you speeding like this again and you’re in big trouble.”

At Mr. Roche’s nod, he holstered his gun and turned.

Out of pity, Lucky walked to his patrol car and grabbed handful of napkins he kept stashed in his glove compartment. When he was within a couple of arms’ lengths away, he tossed them at the old man’s feet and nodded once. The napkins scattered a little, but they could be reached. He wasn’t about to step any closer.

Mr. Roche called his thanks on the end of a grunt. Intestinal sounds met Lucky’s ears, and he frowned.

Lucky walked back to his car and got inside. Staring at the lights bouncing off the trees around him, he shook his head.

They didn’t call him Lucky for nothing.

Want to find out what happens next? Follow this link to find out! Astraea Press