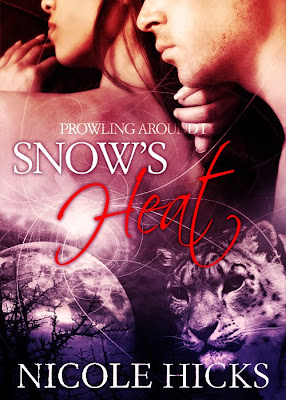 Please welcome Nicole back to my blog as she introduces her novella to you!

When your husband declares you aren’t enough after ten years, don’t get mad… Get a Bic and start a bonfire!

When Sabrina’s husband decides to move on to greener, and freer pastures, she knows she has to move on herself. Wounded and alone, she escapes to a friend’s cabin to think about her future…and burn her past. Literally.

Can she rise from the ashes of her marriage a new woman, or did she lose too much trying to salvage an illusion? Dealing with the heartache of her new reality, she meets a mystery man in the backwoods. One that makes her burn with desire.

Once just a soldier, now Travis is something…more. His last tour changed him in more ways than one. Can he come to terms with what he is, while dealing with the mixture of lust and possessiveness Bree brings out in him? Or is her past too much for him to handle?

Why do things never turn out as I expect?

The moonlight tried to filter through the tall pine trees, but failed except in small sporadic streams of light. Darkness enfolded the surrounding area as Bree looked out the door of the run-down cabin. She got to it too late in the day to do more than unpack her van and make sure the electricity was on before the sun completed its cycle. A broken kind of silence surrounded her. If she weren’t running from the memories of what her ex had said, the quiet song of crickets and hum of June bugs would almost be soothing. The weak moonlight could’ve been termed romantic. The night air would have been cool enough to cuddle with someone. But combined with the echoes of the harsh goodbye and feelings of inadequacy, it brought home exactly how alone she was. It wouldn’t take much to turn this romantic setting into one for a horror film. Just add some low-lying fog and scary music in the background. Shaking the dark thoughts from her mind, she turned to reenter the small cabin when the sound of dead branches cracking underfoot spun her back around to look out upon the wilderness once again.

“Who’s there?” she called before shaking her head in self-disgust. If this were a movie, I’d be yelling at the idiot woman to get into the damned house! But instead of following her internal voice of wisdom, she took a hesitant step onto the ground, hoping to catch sight of whatever had made the noise. The muted sounds of her friend’s ringtone, Hello and welcome to the mental health hotline…. If you are obsessive compulsive press one repeatedly, if you are codependent ask someone to press two, if you have multiple personalities please press three, four, five and six…made her stop and pull her phone from her pocket. She shook her head in exasperation as she flipped it open.

“Hey, sweetie, did you make it up there safe?” Her best friend’s voice sounded heartbreakingly soft with concern.

“Yeah,” Bree replied. “Safe and sound. I told you I would be fine—”

“I know you did,” Margie answered. “But you didn’t call when you got there, and with the way you left town, I was worried. Driving when you’re that upset is dangerous.”

“Yeah, well, I had to get out of that fuckin’ house,” Bree snapped before immediately apologizing. “Marge, you didn’t deserve that, it’s just that in our…his house, I feel suffocated and isolated at the same time. You know what it’s like being in a small town. Everyone knows everything, but when they know something is up before the wife does…. Well, it isn’t pleasant.” She ran a hand through her hair and paced.

“I just, I had to get out. To get away from everyone’s prying eyes, and the kids, to get myself put back together a bit. I need to have it together when I tell them their father moved on—they still don’t understand. To be ready for the questions deeper than the ones they’ve asked so far. I’ve tried to be fair when they ask questions, but it is so hard…. It’s been seven months since he told me he wanted a divorce, two months since it was final and I still expect him to walk through the door. To tell me it was a mistake—that he wants me and the kids back…. That the bitch he brought to the house when he came to get the kids meant nothing. I know that isn’t going to happen, and I don’t really want it to, it’s just a small part of me still misses him.”

“I know, sugar,” Margie consoled, “but we both know that’s just wishful thinking.”

“Exactly! And it’s something I need to get over. I know he isn’t coming back and that’s for the best. The kids are happier without the stress of us fighting, they’re doing better in school and my stress level is lower overall. I just have weak moments that overrun my common sense. And each and every time it happens, my heart breaks all over again. When he came to get the kids on our anniversary with that bitch who told the kids “You can call me Mommy”—it was like a knife in the back. I just need to take a step back, to unwind, to—”

“Get laid,” Margie popped off quickly with a light coating of laughter.

Want to know what happens next? Follow these buy links to find out! Amazon, Barnes & Noble, Kobo, All Romance Ebooks

Thanks for stopping by and checking out Nicole's book!!!