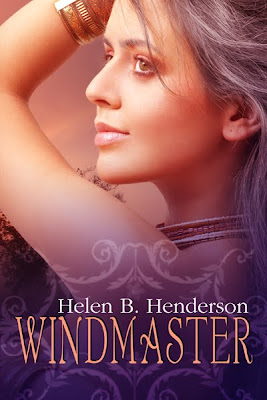 I have Helen Henderson back on my blog today! She's sharing her novel with you!
Book Specifics -
Genre - Fantasy Romance
Length - 224 pages
Heat Level - Sensual
Sexual Orientation - M/F
Content Warnings -
Blurb -
Despite his insolent attitude, Ellspeth, captain of the Sea Falcon, is attracted to the dark-haired worker she hires to help unload the vessel's cargo. When the supposed dockhand reveals he is Lord Dal, the last member of the Council of Wizards, and her passenger, Ellspeth breaks a cardinal rule—fraternizing with the paying customers. Bringing Dal back from near-death releases her latent powers and threatens her captaincy. For to have magic she must give up the sea.

In accordance with an ancient prophecy, Dal allows Ellspeth to be handfasted to him without her knowledge or consent. However, the prophecy doesn't state whether she will return his love. A likelihood threatened as the deception is unveiled and they are hunted by fanatical clerics bent on ridding the world of magic and those who wield it.

Trapped within the Oracle's Temple and marked for sacrifice, Ellspeth is forced to choose between survival, saving the future of magic...or love.

Excerpt -
Dal’s low tones at last broke the silence. “Captain Ellspeth, I owe you a debt for summoning me back from the void. It is a debt that cannot be repaid.”
Ellspeth chose her words carefully. “You owe no debt, Lord Dal. The Sea Falcon would have been lost without your aid.” Despite the fact that legend said debts to wizards had been known to have steep consequences, her loyalty to clan and ship pushed her into a decision. Taking a breath, Ellspeth gave the formal response of her own indebtedness. “It is I who owe you.”
The wizard’s eyes sparkled with amusement. “Then, my fair captain, let’s call it even." His expression grew serious. "Why did you not pursue the Way?”
Her pulse raced, and she looked away from Dal’s unflinching stare. “Only mages study the Way. I have no power. I’m not a mage,” she answered with more force than she intended. Under the wizard’s scrutiny, she continued in a voice barely above a whisper. “I come from a family of traders and ship captains. From the first time my grandma took me to sea I knew I belonged there.”
“You could be a wizard,” Dal persisted. “The power is within you. Deny you feel it.”
Ellspeth looked over the busy deck, anywhere but at Dal. She knew every crewman. She could tell the depth of water beneath the ship’s hull just by the sound, and the amount of sail needed for any given wind. The Sea Falcon was her ship.
“It was your magic combined with mine that saved the Falcon,” Dal persisted. “And, it was you alone who brought me back.” Ellspeth focused on the pennant flying from the center mast. Only the slap of waves against the bow broke the silence between them.
She stood, breaking the magic that held them private. “I’m Ellspeth of the House of Cszabo, daughter of Mirim, granddaughter of Rima. I am captain of the Sea Falcon. I am not a mage!”
Whatever else she would have said died with the look of disappointment on Dal’s face.
“You can’t deny,” Dal started. His voice faltered at Ellspeth’s icy glare. “I’m sorry. Captain. I did not mean to intrude on this lovely evening.” He pulled his hand back from its gesture of entreaty.
Ellspeth offered only a short word of parting and retreated to the sanctuary of the quarterdeck rail. She watched the mage light slowly disappear and the wizard’s features dissolve into shadow.
* * *

The next morning, Dal did not resume the discussion, and in fact, avoided all contact with her. Even though he didn’t pursue the matter, his words haunted Ellspeth. At times only the feel of the sun-warmed gold of her bracelets, the goal she had worked so hard for, enabled her to regain her equilibrium. No matter how hard she forced down the urge to feel the touch of magic or Dal’s hands on hers, it kept returning. The impulse to reach for him surged forward every time she saw him at his usual spot at the foredeck rail. His feet slightly apart as he leaned upon the slick wood, his gaze focused out to sea.
Magic and the sea don’t mix, Rima had always said. Ellspeth sighed, her grandmother had been right. Magic almost sank the Sea Falcon.
An inner voice countered for the side of magic. Dal had saved the Falcon at the risk of his own life.
No, his presence is a threat to the ship. I can't wait to have him ashore.

Like what you read? Want to know what happens next? Follow these buy links to find out!!! Champagne Books, Amazon (Print), Amazon (Kindle), All Romance
Hope you enjoyed, thanks so much for stopping by!
Elaina
Posted by Elaina Lee at 9/22/2011 10:15:00 AM