Guest Excerpt - On the Choptank Shores 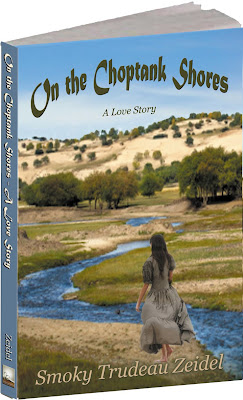 Yesterday you were introduced to Smoky Zeidel, today you get a peek at her novel, On the Choptank Shores. Please take a moment and check out this book!
Book Specifics -
Genre - Romantic Suspense
Length - 196 pages
Heat Level - 2 of 5 (sensual, one graphic scene)
Sexual Orientation - M/F
Content Warnings -
Blurb -

The tragic deaths of her mother and two younger siblings have left Grace Harmon responsible for raising her sister Miriam and protecting her from their abusive father, Luther, a zealot preacher with a penchant for speaking in biblical verse who is on a downward spiral toward insanity. Otto Singer charms Grace with his gentle courtship and devotion to his brother, Henry. But after their marriage, Otto is unable to share with Grace the terrible secret he has kept more than twenty years. Otto believes he is responsible for a tragic accident that claimed the life of a young woman and left Henry severely brain damaged.

Luther’s insane ravings and increasingly violent behavior force Grace to question and reassess the patriarchal religious beliefs of her childhood. Then tragedy strikes just when Otto’s secret is uncovered, unleashing demons that threaten to destroy the entire family. Can Grace find the strength to save her sister … her marriage … them all?

On the Choptank Shores is a love story: The love between a young wife (Grace) and her decidedly middle-aged husband (Otto), and the love of a big sister for her abused baby sister (Miriam). It is the story of the love for an aging, grief-stricken father (Luther) who is spiraling into a dark world of insanity, and the love of a kind and benevolent God whom Grace knows must exist, despite the crazed ravings of her father, who paints a picture of a vengeful, angry God as he spouts biblical verse to defend his abuse of both Grace and little Miriam. It is a story of the land on which they live, and the power of Mother Nature. Most of all, it is a story of love conquering all.

[Luther] was mucking out the stalls when Grace found him in the barn.

“You will never, ever, hit Miriam again, or lock her in that frightful closet, do you hear me, Papa?” she said, never raising her voice yet nonetheless unnerving Luther with her cold tone.

Luther put down his shovel and picked up a pitchfork. “‘Whom the Lord loveth he correcteth, even as a father the son in whom he delighteth.’” He tossed a forkful of straw into the stall. “‘He that spareth his rod hateth his…’”

“Stop it, Papa. I’ve heard the speech before, and I’m tired of it. There is no excuse—none, do you hear me?—for beating Miriam until she’s a bloody mess.”

Luther continued pitching straw to the horses, not bothering to look up at his daughter. “ ‘Hear, ye children, the instruction of a father, and attend to know understanding. I have taught thee in the way of wisdom; I have led thee in right paths.’”

Grace yanked the pitchfork out of his hands and sent it flying across the barn. “What have you taught Miriam other than to be afraid of you?” She spat the words at Luther as though they were bits of rotten meat in her mouth.

“What I am teaching her is to respect the authority of her father, something you attempt to thwart at every opportunity.” Wiping a trickle of sweat from his brow, Luther brushed past his daughter and headed for the barn door.

He stopped cold in his tracks. Shaking with anger, he turned back to face Grace. The dam burst, unleashing a rage he had never known.

“Perhaps the problem here is that I spared you a few too many whippings for your own good, you impudent wretch,” Luther roared, lunging toward his daughter.

The first blow to her face sent her reeling backwards, and she hit the side of the stall with such force the horses reared up in fear. Luther grabbed her by the wrists, yanked her to him and struck her again. The awareness that Miriam had come into the barn and was now standing in the doorway, screaming, enraged him even more, and he raised his arm again.

This time, it was Luther who went reeling. A force stronger than his own grabbed his upraised arm, jerked it painfully behind him, then slammed him into the wall. His spectacles slid from their perch and shattered, piercing his left cheek with shards of broken glass.

“Take your filthy, pious hands off of my wife.”

“She’s not your wife. She’s my daughter. And if beating her is the only way to knock sense into her, that’s my right and holy duty.” Luther winced, as Otto tightened his grip and gave his arm a sharp twist.

“She’s not my wife at the moment.” Otto leaned heavily into Luther, his breath hot in Luther’s ear. “But she will be by sundown, if she’ll have me that soon. I came here today to ask for your consent, but I’ve reconsidered that idea. You’re not fit to ask. And judging from what I’m seeing here, I don’t think there’s any question she’ll come with me right now, do you, brother Luther?”

“Take your hands off of me. Grace will not consider going anywhere with you without my blessing.”

“Oh yes I will.” Grace struggled unsteadily to her feet; Otto loosened his hold on Luther to assist her. “I’ve already consented to be his wife. Furthermore,” she glared at Luther, the red handprint on her cheek glowing like a flame, “we’re taking Miriam with us. That’s what I came out here to tell you—you will never lay one hand on her again because she’s coming with me, with us.” She turned her attention to the sobbing child, pulling her into the protection of her arms.

“Fine. Go on then,” he snarled, picking a shard of broken glass from his cheek and hurling it to the barn floor. “You’re no daughter of mine; you’re the spawn of Satan himself. But Miriam stays, you hear me? Miriam stays right here where she belongs.”

He redirected his verbal barrage toward Otto. “Mark my words, Otto, you’ll regret this some day. ‘A foolish woman is clamorous: she is simple, and knoweth nothing. Her house is the way to hell, going down to the chambers of death.’ That’s from Proverbs, Chapter Fi…”

“‘A gracious woman retaineth honour: and strong men retain riches.’ I can quote scripture too, Luther.” Otto helped Grace to her feet, never taking his eyes off Luther. “Go pack a bag, and one for Miriam, too, Grace.”

“Not the little one. Miriam stays.” Luther made a lunge toward Miriam, but Otto was quicker, stepping between Luther and his daughters.

“I don’t think you want to do that, Luther.” Otto slammed him against the wall a second time. “Go on Grace. I’ll be right behind you.”

Luther watched as Grace shepherded Miriam out of the barn, murmuring soft words he couldn’t quite make out as they disappeared into the bright sunshine.

“Don’t you move from that spot until we are packed and away from here, do you understand me, Luther?” Luther nodded, understanding the implied threat in Otto’s words. “Good. We’ll be out of you way shortly. Good day, brother Luther.”

Ten minutes later, Luther heard the pickup truck doors slam, then the crank of the engine. He stood in the barn door and watched until the truck disappeared down the dusty road.

They hadn’t even said goodbye.

Want to know what happens next? Follow these buy links to find out! Amazon, Goodreads, Smashwords, All Romance

Thank you for stopping by!