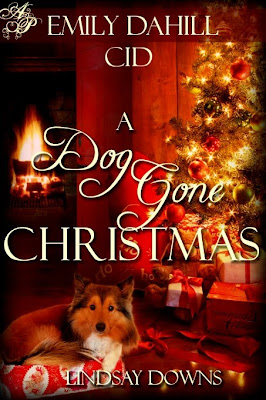 Our second day in the Holiday Reads Extravaganza finds us with another military themed story by Lindsay Downs. This one about love, loss and rescue! Be sure to check out this heart-warming (and heart-melting) read.
Book Specifics -
Genre - Contemporary Military Mystery, Christmas Mystery
Length - 23k (Novella)
Blurb -

When a call for paws goes out, five friends bring their collies without question to a friend’s house. They learn the collies are needed to help seven children with the grief of losing a parent in Iraq or Afghanistan. Now, with seven friends, four collie yearlings and their mother, they set out to help the children

Not far away a mother hopefully leads her seven puppies to safety from a man intent on selling them for illicit purposes.

By a miracle of fate the two mother collies find each other right before the man sells the puppies.

That Christmas morning will be one the children will remember all their lives and they are united with the puppies.
Excerpt -

Even from his new vantage point, he could still see how the other kids and collies were doing. As the time came to a close, out of the corner of his eye he spied something very suspicious. The twins. Amanda seemed focused on moving Maggie and Jack not only away, but so their backs were to Nibs.

Under normal circumstances, Thaddeus would alert the two, but something told him what he was about to witness could and would be priceless. Once he saw the adults had been suckered into dropping their guard, he watched as Adam slipped an arm around Nibs’ neck. Hunched over like in a cowboy movie Adam tried to lead the collie toward the door and freedom with him and his sister.

Subtly, Thaddeus readjusted his position closer to the door to prevent the five-year-old from walking off with Nibs. When Adam, splitting his attention between his new buddy and his sister, got closer to the door Thaddeus stepped out right in front of Nibs who stopped, and sat dragging the hapless boy down with him.

“Oomph,” Adam grunted, as his backside came in hard contact with the floor. As he looked up the first thing he saw was a pair of legs in khakis, the toes from penny loafers peering out from the cuffed pants. With a sheepish smile he lifted his head higher only stopping when he saw Thaddeus smiling down at him.

“And just where do you think you’re going with Nibs, young man?” Thaddeus kept his voice soft and non-threatening.

“Na, na, nowhere sir,” Adam stammered out. He followed Thaddeus’ eyes to the collie, happily sitting beside him. “Honest sir, he followed me. I’d never,” Adam slowly shook his head. “take him, even though I’d love to have such a smart buddy as him. I mean, my sister’s all right but a girl and us guys got to stick together.” To emphasize his love for Nibs, Adam encircled the collie’s neck with his tiny arms earning him a head rub. “I wish my sister and I had someone like him to talk to. Mommy’s good, but sometimes she just doesn’t have the time to listen. Ya know? I mean with daddy gone she has to work extra besides her soldiering.”

For every copy sold, Lindsay is donating to the Collie Rescue League of New England. So not only are you getting a wonderful story, but you'll be helping a wonderful cause! Head over to Astraea Press to get your copy now!

Remember, comments get you entered into ALL contests that are happening during the extravaganza, winners are chosen on the 23rd, so be sure to comment!

Thanks for stopping by, come back tomorrow for your new read!