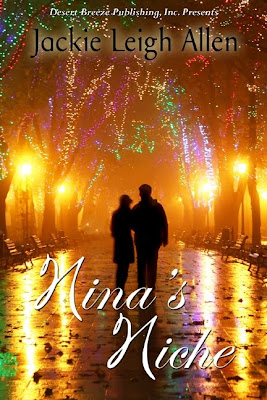 Five days until Christmas! Hope your holiday shopping is almost done! If not, I've introduced to you many stories that would make fabulous presents for you, or someone who enjoys holiday reads. Settle back and check out this next book.
Book Specifics -
Genre - Contemporary Romance
Length - Novella
Heat Level - Sensual
Sexual Orientation - M/F
Content Warnings -
Blurb -

Nina Jones sets out to break every rule on her Nice Girl List. Running off the road and winding up in the arms of the town bad boy Jake Anderson is a good start. She checks body piercing, (bad idea) getting drunk, (worse idea) and dating Jake (great idea) off her list.

Jake's tired of that bad boy label and he wants more than a fling with Nice Nina. He works hard on the town food drive, collects toys for tots and helps Nina reconnect with her long lost sister. He even helps her find her niche as Nice and Sexy Nina.

"See you at the festivities," she called to Carol and went to meet Jake in front of the shop. Strings of lights lit all the stores, but the Julian Junque Shoppe out-shone them all. Of course, Nina might be biased since she'd done the decorating. Tiny white lights outlined the windows where a collection of Victorian dolls sat having tea in front of a miniature Christmas tree covered with more tiny white lights.

A moment later, a better decoration arrived. Jake strode up in his black leather jacket and boots with a big, inviting smile on his face. And the smile was just for her. People passed on their way to the tree-lighting ceremony, but Nina was barely aware of them. "You're early." She stood close to Jake, her breathing seriously impaired by his nearness.

"I didn't want to miss a minute with you."

Jake shook his head. "You were always early for everything, eager to get going."

Eager to get away from the stifling atmosphere at home. "You remember that?"

"I remember everything about you." He put his arm around her and leaned close. "For example, I remember how it turns you on when I blow in your ear."

His soft breath made her insides jiggle. She tried to move away and he tightened his grasp, holding her close to his side. "And you pick gloves that are stylish not warm." He held up her hand encased in a thin white glove with a fur ruff.

"Where else would I wear them? There's no occasion for fur in San Diego." She wasn't going to admit her hands were already cold.

"It better be fake or the anti-fur people will be after you."

"Of course it is. See?" She stroked her hand across his jacket leaving a trail of white fibers.

"That's good. Have you had enough of being fashionable?" He pulled a pair of thick knitted mittens from his pocket.

"I think those are a bit large for me, but it was thoughtful of you to bring them."

"Too big for one of your hands but just right for two hands." He pulled her glove off, finger by finger. Nina fantasized about him stripping off more than a glove. She was hot enough now, but she wasn't about to stop him. He tucked her glove in his pocket and put his hand and hers into one of the mittens. His hand was cold. He hadn't been wearing any protection, but his touch warmed her all over.

"You wear the other one," she said. "I'll put my other hand in my pocket."

"Okay." He pulled the mitten over his hand with his teeth.

It was exciting being bound to Jake by the mitten. It gave her ideas for other ways of being bound -- silk scarves, velvet rope. Where had that come from?

Want to know what happens next? Head over to Desert Breeze Publishing to find out!

Thanks for stopping by and be sure to check back tomorrow for yet another remarkable holiday read!