On the Right Track, by Barbara Elsborg 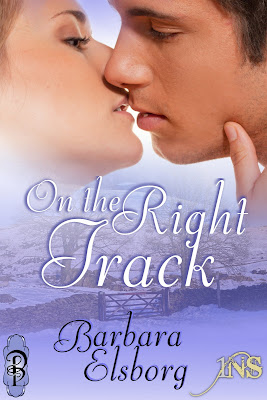 This New Years story will keep you warm, in more ways than one. ;-)

Hollie has very specific requirements for her New Year’s Eve 1NightStand—a tall, fair-haired guy, who’s organized, sensible, likes small-breasted brunettes and can deal with any crisis life throws at him. Except what seemed like a good idea when she set off, turns into the worst idea ever as the snow falls thickly, her fingers clench the steering wheel, and she veers off track.
Dark-haired Nick is on his way to a party with hopes of connecting with a busty blonde—assuming he’s even on the right road and can dig himself out of a heap of snow before he freezes solid. Too bad he never plans ahead, no coat and no shovel in the car, and soon he won’t even see a road at all, let alone any vehicle barreling down it.

“Shiiiiiit,” Hollie wailed as her car skidded on the snowy road.
What to do? Brake? Not brake? Steer into the skid? Out of the skid? She’d been following the tire tracks of another vehicle ever since she’d left the main road, but the snow had suddenly come down so hard the wipers couldn’t cope, and now she’d lost the line.
A snow-laden hedge loomed in the windshield as her car slid sideways and Hollie panicked. She wrenched the wheel in the other direction, only to find the car skating backward toward a wall on the opposite side of the road. Another wrench at the wheel and by some miracle her car did a complete revolution and slipped back into the grooves worn by the only other idiot out in this weather. After a wobbly slide, her vehicle stayed in the ruts and she groaned with relief.
This had to be one of the stupidest things she’d ever done. Once she’d seen the weather forecast she should have cancelled. Instead she’d driven a hundred miles on New Year’s Eve in an unreliable vehicle with no heating, watching conditions worsening around her. She should have turned back when there had been room to maneuver; now she had no choice but to keep going. The only consolation was that at the end of this road, assuming she had the directions right—and Hollie didn’t want to even contemplate otherwise—what awaited her was a luxury hotel, warm bath, bottle of chilled champagne, and hot sex.
The only catch? She had to survive the journey.
~~~~~~~
Like what you read? Head over to Decadent Publishing to find out what happens next!