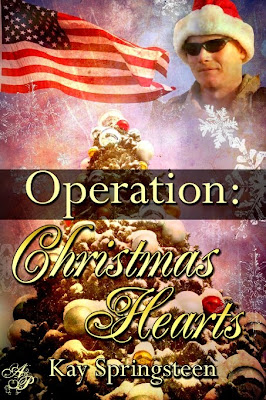 And we kick off the Holiday Reads Extravaganza with Kay Springsteen and her military themed Christmas story!
Book Specifics -
Genre - Contemporary Christmas Romance, Military romance
Length - 83k (novel)
Heat Level - Sweet
Sexual Orientation - M/F
Blurb -
Ashley Torrington never cared much about Christmas before. But this year she’s having a particularly blue holiday because Marine Special Operations Team member, Nick Turner got under her skin just before he was deployed to Afghanistan. With her neighbors’ precocious daughter Bella volunteering Ashley for a special project at school, and a mysterious white-haired stranger named Estelle in town buying gifts from Ashley’s shop, not to mention the odd assortment of presents Ashley’s been receiving from an anonymous source, she shouldn’t have time to worry about her guy. But when he and his team go missing the week before Christmas, she realizes only a Christmas miracle will reunite them.
Captain Nicholas Turner never backed down from challenges—on the battlefield or in his personal life. But he’d never met a challenge like Ashley, who doesn't want to be anyone’s “girl back home.” Now he’s on the other side of the world, wanting to be anywhere but in Afghanistan for Christmas. About to embark on one of the most dangerous missions of his life, he needs Ashley to know she’s much more than the girl he’d left behind, and he does plan to come home to her. But in the meantime, a little Christmas magic would be appreciated. Little does he know, he’s about to get his wish.
Excerpt -

T minus 16 days ’til Christmas

Ashley bit into a crispy marshmallow treat as she waited for her laptop to boot. The sticky sweetness exploded in her mouth and she moaned out loud. Maybe eating one of the little goodies for breakfast was a questionable course of action, but she was out of toaster pastry. She took another bite and licked her lips. Adding the chocolate and caramel toppings had been inspired. She didn’t even want to think how many inches eating her latest batch would add to her hips, though. Maybe she’d take an extra walk around the block to work some of it off.

Her home page popped up with a news alert about an explosion in Afghanistan that had killed seven U.S. Marines and Ashley’s heart pushed a logjam of emotion into her throat. “Oh, no,” she moaned. Her fingers went limp around the remnant of crispy treat she held and it fell to the floor.

She clicked on her e-mail icon and tapped a red fingernail against the side of the keyboard while it took its sweet time loading.

And there it was. An e-mail from Nick. And the timestamp was only a few hours ago.

Hey, babe—Different phone, different everything. I’m going to try to call but if we get cut off it’s just because coverage is so spotty here. Nothing to worry about. I don’t want you ticked off at me, maybe thinking I hung up on you.

Ashley’s heart crowded her chest again. So, he wasn’t safely in Germany. She’d known this was going to happen. But knowing something would happen and realizing something had happened, she discovered, were two entirely different concepts. She steadied her breathing, knowing he hadn’t mentioned where he was because he couldn’t. And that meant he’d gone to someplace dangerous.

Her hands weren’t at all steady when she clicked back over to the news story. Maybe they’d identified the casualties. Am I horrible because I want it to be someone else’s name I read? Is this wishing someone else’s heart will be broken just so mine isn’t? She skimmed the announcement; no names appeared in the frustratingly short article. Tears streamed, and she did nothing to stop them.

Frantically, her gaze danced over the Internet page again, trying to find something—anything to prove this wasn’t about Nick and his men. Finally, her mind zeroed in on the words that saved her sanity: In an incident that occurred at approximately 0830 hours GMT Wednesday… Okay. Good. GMT. That was Greenwich Mean Time.

Holding her breath, Ashley clicked back to the e-mail. Time: 0912 GMT. With a whimper, she leaned forward, folded her arms on the table, then buried her face and sobbed, this time with tears of relief. He’s okay. My Nicky’s fine.

Ashley mopped her eyes with a napkin from the holder in the center of the table. She’d made Nick a promise not to cry. She supposed technically she hadn’t broken that promise. Not exactly. Ashley looked around for the piece of treat she’d dropped. Finally, glancing at the floor, she spotted what was left of it. In her agitation, she’d ground it into her carpeting. That was going to have to wait while she read the rest of Nick’s e-mail.

It’s not fair, you writing about crispy treats and chocolate and caramel. I just ate something in the mess hall that I THINK might have been meatloaf but it was hard to tell since I didn’t want to look at it too closely. You make magic with crispy treats. At least that’s what you told me caused all those tingles I got when I looked at you on the beach. Remember our first date? I do. And now all I want to do is eat one of your crispy treats smothered in chocolate and caramel. But save some of those toppings because one of these days I have a much more creative use for them. I’ll leave that part to your imagination.

“Oh, my.” As she read Nick’s words, heat flowed over her like warm caramel, which had undoubtedly been his intent. Well, Ashley had a very, very creative imagination, and she was well aware Nick did as well. She made a mental note to always have plenty of toppings on hand. Then she traced her finger over the last words in his note and sighed.

Ashley sank her teeth into her lip until the sharp pain because unbearable. Nope. Not gonna cry. She had promised Nick. Besides, her nose was stuffy enough. And she had a lot of work to do, and now that the day had started so well, she planned to have fun doing it. Beginning with finding what she could of her true hair color.

Want to know what happens next? Head over to Astraea Press to find out!

Kay is giving one lucky commentor a chance to win THEIR choice from her back-list! Trust me peeps, this woman can write and has amazing stories, so be sure to comment so you can snag one! Winner will be chosen on the 23rd. More comments equals more entries!

Come back tomorrow for your next holiday read!