The Yuletide Yorkshire, by Suzanne Knight 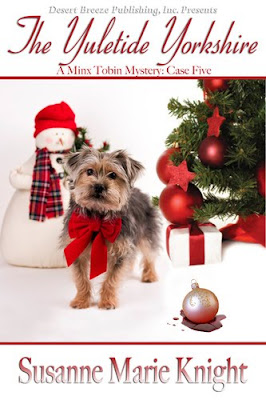 For today's featured Holiday Read, I give you a little mystery with your romance. ;-) Enjoy!
Book Specifics -
Genre - Mystery, romance, murder mystery
Length - Novella
Heat Level - 3 of 5 (sensual)
Sexual Orientation - M/F
Blurb -
Who is Minx Tobin, you ask? Minx is a fitness instructor newly relocated to Los Angeles, California, who has a knack for solving puzzles--puzzles concerning dead bodies. For fun, romance, and... unexpected corpses, follow her adventures in the Minx Tobin Murder Mystery Series!

Home for the holidays, Minx Tobin introduces her parents to her homicide lieutenant, Gabe Harris. Unfortunately for her, her ex-fiancé Jared drops in on them, creating friction. But Jared soon needs Minx's help in the sleuthing department because a gruesome "present" is found under the tree. Once again, Minx is hot on the trail of a desperate killer.

All Gabe wants to do is propose to the woman he loves. Instead, he has to deal with a cast of East Coast characters, including an unexpected murder. Why do dead bodies always seem follow Minx Tobin??

Excerpt -
Truth be told, she was looking forward to seeing everyone again. Everyone except Jared, of course. With him, unpleasant memories abounded. After the acrimonious breakup back in April, she’d packed her bags and headed west. She hadn’t been home in seven months.
Gabe linked hands with hers, gave a brief squeeze, then returned his to the steering wheel. “I hope we don’t run into Jared.”

A thought caused her to frown. “My mom told me they’re having a Christmas Eve party. Jared’s parents are always invited. Well, they’re divorced now, Conrad and Esther, but since Conrad remarried, he and Pia will probably attend. So, shoot, Jared might have the audacity to show up at the party as well.”

At that unexpected remark, Minx laughed. “You’ll do no such thing, Lieutenant. You’re supposed to make a good impression on my parents, remember?”

“True.” He headed for the freeway’s airport exit. “I’d better be on my best behavior. It wouldn’t do if they disapprove of me.”

He couldn’t possibly be worried about that. But what if he was?

“Gabe, are you nervous to meet my parents?” For some reason, she started to become uneasy herself.

“No, I’m sure I can convince them my intentions are honorable toward their only daughter.” He gave Minx a reassuring grin.

She exhaled relief. “Okay, good. Because I saw Dallas today, and he thought you might be.”

“That exercise gigolo?” Gabe fisted his hands on the steering wheel. “I guess I’ll have to beat Dallas Porter up as well.”

Minx laughed. “That won’t be necessary, Lieutenant. Remember, ‘tis the season to be jolly, not to commit a folly, right?”

“Point well taken. Now, here we are at airport parking. Let’s hold off on any more talk of old boyfriends. I confess I’m getting a bit insecure.”

She dimpled a smile. “Really? That sounds so strange coming from a man who dates all the hottest young actresses in Hollywood.”

Gabe waited until they’d parked, then he turned to her and cupped her face in his hands. “The word is ‘dated.’ Past tense, sweetheart. And, as I told you, there’s only one female who interests me now. And that’s you. So, Tobin, get your curvy butt out of the car, so we can begin our Christmas adventure.”

She kissed him back. “Okay, Lieutenant.”
~~~~~~~
Want to know what happens next? Follow this buy link to Desert Breeze Publishing to find out!
Be sure to comment for your chance to win books being giving away by participating authors during the Holiday Reads Extravaganza! All comments until the 23rd count as an entry, so don't miss your chance!
Thanks for reading and be sure to return tomorrow for the next book in line!
Elaina
Posted by Elaina Lee at 12/19/2011 06:00:00 AM