Friday the 13th Blog Hop! Why Today is Unlucky 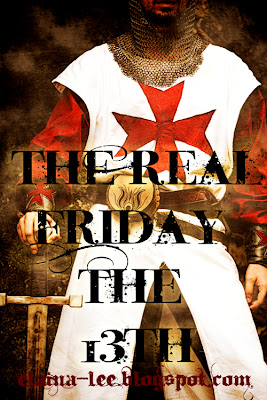 NEW TO THE HOP?  HEAD TO  http://briclarkthebelleofboise.blogspot.com TO START AT THE BEGINNING!!!  HAVE FUN!

A couple years ago I read a book titled Dungeon, Fire and Sword, by John J. Robinson.  A fascinating history of the Knights Templar from their creation to their betrayal.  He taught me something I'd have never otherwise have known about, since I never picked up The DaVinci Code (I guess it's covered in there too, heh).

I'd never been one to really care about Friday the 13th, it hasn't been an unlucky day for me.  But on Friday, October 13th, 1307, it was a very unlucky day for any man associated with the Knights Templar.  The Catholic church, having decided the Templars were far too powerful and rich, signed an order declaring them all traitors of the church. The first arrest happened around 5 pm, that Friday the 13th.  Sadly, those that weren't killed (refusing to confess to the crimes they were charged with resulted in death), were given little souvenirs of their time in the torture chamber, usually their charred finger or toe bones in a little pouch.  Since that day, Friday the 13th has been considered unlucky.

When my family makes a big deal about today, I laugh and say, "There's only one Friday the 13th I'm truly concerned about."  You can rest assured this girl will be locked up tight in her house when Friday the 13th falls in October....


Hop to the next stop (link below image)!


Don't forget to hop to the next stop for your chance at the Grand Prize!  Good luck!


Thank you for stopping by!