Teaser Tuesday - The Heart of the Dragon

Last week we met Author S.D. Grady as she wrote about music that inspires her.  Today she has shared more of the book she spoke about in a nice teaser excerpt!  Enjoy! 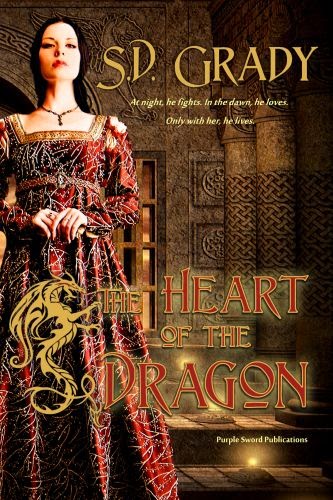 At night, he fights. In the dawn, he loves. Only with her, he lives.
Lady Yelena is sent in marriage to Prince Pietro, known as the Vellenican Dragon. Instead of her sisters' elegant beauty, she brings a dowry of swords to the warrior prince. A hard man to love, night after night the prince leaves Yelena behind as he battles against the evil Wasti in a generations long war. Each morning he returns to her bloody and beaten. They despair of ever finding peace for their homelands. Then Yelena discovers treachery in her personal guard and she must find the strength to raise her own sword and fight for her family, her honor, and her prince.

Yelena’s arms shook. Sweat trickled down her neck. Her breath came in ragged pants. He crowded her, forcing her submission. She growled and pushed forward. His advance stalled, she danced away from his reach. She laughed. “Again!”

Pietro caught his balance , brought his sword back to prime and nodded his agreement. Yelena stepped forward. Her blade swung in a short arc designed to make him block high. Their blades sang as they clashed.

She worked through the rudimentary attack, sure she did not challenge his abilities one bit. She paused, met his laughing eyes, and ducked. She rolled away and earned a grunt of surprise. She kicked out with her left foot, regained her balance on her right and rose up inside his defense.
She punched his ribs. “Do you concede, my lord?”

His elbow trapped her fist. “No. You just nicked my armor and dulled your dagger.” His foot stepped between her legs and lifted.

Off balance, she dropped her sword and grasped his upper arms.

She felt the blush only a second before his lips conquered hers.

The kiss lingered, sweet and hot. When he released her, he stepped back and bowed. “Shall we go again, my lady?”

The practice yard appeared ghostly in the yellow light of the torches. She bent to retrieve her steel from the paving stones, never taking her eyes from his relaxed form. She stood, absently tugged at her leather leggings and kicked at a pebble.

“Why would you ask, my lord? Do I appear fatigued?”

He winked. “No, just flushed.”

In frustration, she raised her weapon and came at him again. He deflected her advance with ease. The truth was she was feeling a bit tired. Fighting beneath the half-moon, parrying his masterful thrusts, she had reached her limit much sooner than she had expected. But she didn’t want to stop.

For the third night, Pietro remained behind as the army marched out against the Wasti. During the hours they spent together, he made every effort to be a civilized gentleman. Laughter came easier to her—and him. She thought the tight lines that carved his mouth had eased.
Her sword went flying through the air and she found herself at the mercy of Pietro’s deadly point. Her lips pursed in vexation and she nodded to him.

“Shall we call a halt?” Still, his sword rested against her breastbone.

“You were not paying attention.”

She stepped back. Ashamed, she pulled at her gloves. “I admit to being distracted.”

He sheathed his blade. “Did Captain Sershi not teach you any better?”

Bristling at the insult, she walked toward her corner. “Of course he did.”

He followed her. “Loyalty is an admirable quality, my lady.”

Her annoyance at failing to adhere to practice yard protocol diminished. She took his compliment and savored it. “Thank you.”

He began to lift her light mail shirt over her head. “Where is the good captain? I have not seen him since supper.”

She pulled at her linen shift before reaching for a long, silk cloak. “I gave him leave to seek his own entertainment, tonight.”

Pietro crowded her against the high wall. “Feeling a little braver, my little one?”

She shivered as his rough hand held her neck. His thumb ran up and down her throat in thrilling small circles. She frowned.

The spark of humor had vanished. He watched her. Severe. Angry. Hurt?

Even as she had become more comfortable in his presence, there were still moments when she wondered what he was truly thinking.

She placed her hand over his and offered a shy smile. “Can I take a bath?”

That got him to smile again. “Can I join you?”

Her heart hammered. Was that from the sword play? Or the way his breath drew bumps from her flesh? She swallowed and nodded. “Of course, my lord.”

His other hand grasped her waist and drew her forward. Unable to escape, she squeaked when he sucked the surprise from her mouth.

He kissed her often. There had been few activities where he couldn’t find an excuse to be near her, touch her, taste her.

The heat built. Her limbs grew heavy. She sank into the seductive strength.

She stood, firming the muscles in her legs, and blinked.

“Before or after?” his deep voice questioned. He nipped her ear, her neck and kept moving lower.

“Before or after what?”

Strong fingers pulled at her long braid. “The bath. Shall we go to bed before or after we are clean?”