Please welcome Brea Essex as she shares her long teaser excerpt for you from her book Ouroboros! 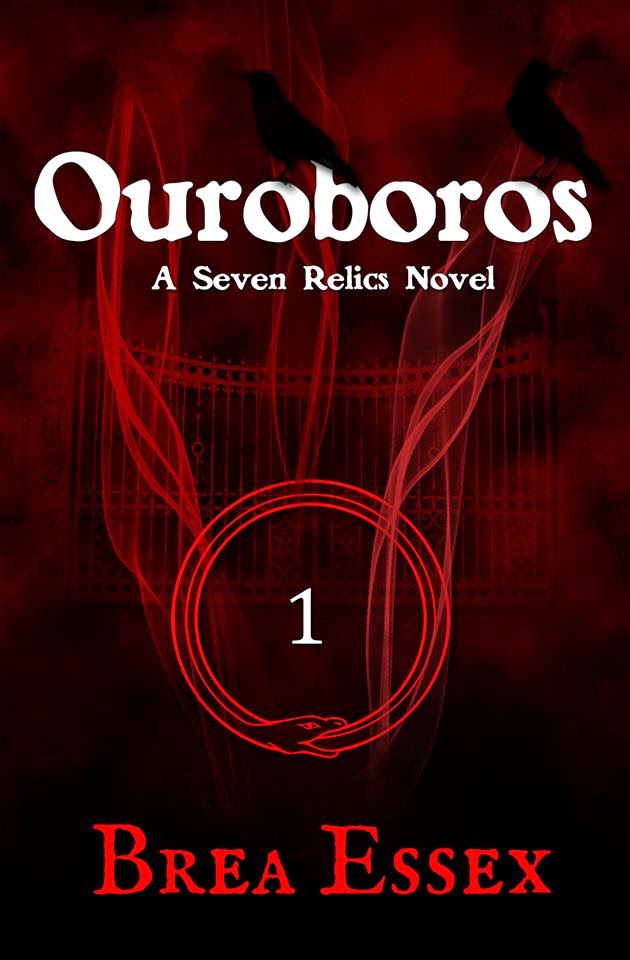 
Waking up from a coma is hard enough, but throw in an undead ghost at the foot of your hospital bed, and you’ve got a big problem.

While recovering from a rock-climbing accident, eighteen-year-old Rhiannon Sorenson meets Zachary Cohen, a Zayin—one of an elite fighting force for the supernatural realm—and wonders why she’s the only one who can see him. Not only that, he tells her he needs her help to find his physical body, which has mysteriously gone missing. As Rhi reluctantly agrees to come to Zac’s aid, they both uncover a trail of deadly revelations about a powerful and evil being: The Necrovorst.

In this first installment of a trilogy filled with vibrant and imaginative mythology from around the world, follow Zac and Rhi while they face powerful, supernatural beings, and learn all that they can in order to stop The Necrovorst.

I felt as though I was walking in circles, and the beginning of something like panic started to lick at my mind. Had they forgotten I was coming? Had they not prepared a place for me? I began to run through the house. The walls seemed like they were closing in on me. The ceiling was dropping lower and lower. The halls were becoming narrower. Everything was shrinking, shrinking, shrinking.

By now, the ceiling was too low for me to stand. I ceased running—there was no room. Crouching down, I continued my search. What was I looking for? I had forgotten. All I knew was that I needed to find something.

Now I was crawling on my hands and knees. The walls and ceiling were all so close together at this point, that I couldn’t go any further. I was completely trapped. Maybe I could turn around and try to trace my way back.

I backed up until I could finally turn around. When I turned, there was a boy standing there. I stifled a scream. He had appeared so quietly! There was something familiar about him. His slightly wavy, messy brown hair reminded me of someone. Where had I seen him before? A movie? Was he someone I knew?

“I can help you find your way out,” he intoned quietly.

I stared at him for some time, unsure whether I should accept his help or not. Although I really did want out of this seeming maze, there was something about him that didn’t sit quite right with me. I opened my mouth to agree to his help, but instead watched in shock as a blade appeared, glinting in the middle of his chest. The boy’s eyes opened wide, and he slumped to the floor. I began to scream shrilly, my shrieks reverberating through my head as they bounced around the narrow enclosure behind me.
Another boy stood behind him, his sandy brown hair gleaming even in the poor lighting. He twisted the blade in the fallen boy’s body, and then cruelly jerked it out. He calmly pulled a cloth from his pocket and cleaned the sharp edge that was now dull from a dark substance. Blood? No, it seemed darker than that.

“Stop screaming, Rhi,” he ordered me.

How did this boy know my name? My curiosity got the best of me, and I fell silent.

“Good. Now, you must listen to me. We have to get out of here, immediately.”

“Why did you kill that boy?” I asked shakily.

“He certainly looks dead!” I shrieked.

“Why should I trust you?” I demanded to know.

He grabbed my chin and forced me to look straight at him. “Listen to me,” he commanded. “You’re caught in a nightmare. We have to escape before it implodes.”

I stared at him, confused. He sighed, and started again. “Rhiannon, a wraith has pulled you into a nightmare. This is your nightmare. I’ve banished the wraith; now we need to get out of here, or we will be trapped forever.” He held out his hand toward me. “Come with me.”

“Yes, you do. I’m Zac. You will remember everything once we are out of this house. Now, let’s go!” He grabbed my arm and pulled me after him as he ran through the twisting halls.

When we reached the kitchen, I skidded to a stop. My new family had cooked breakfast for me! I frowned. Had morning come while I wandered the halls? The whole night was gone.

“But they’ve made me breakfast.”

It may have been my imagination, but it seemed as though a sad look crossed Zac’s face. He took my hand again and tugged me toward the door. I fought and pulled, but he was much stronger than I. He dragged me down the front steps, and as soon as our feet alighted on the ground, he hollered, “Run!”
I stumbled and tripped as he towed me across the uneven ground. I felt a shaking beneath my feet, and Zac shoved me roughly to the ground, covering my body with his. I started screaming again and felt as though something was trying to rip my very soul out. Zac kept his arms around me, ignoring my struggling. I felt a strong sucking sensation, and then we were both tossed across a rolling, grassy knoll. Finally, the rumbling stopped and everything went black.

I looked up cautiously. Zac’s face was pressed close to mine, and I could feel his weight on my back.
“Zac?” I whispered. “I can’t breathe.”

His laugh echoed faintly in my ear. He rolled and fell off of me.

I turned to face him. “What just happened?”

“Do you remember who I am now?” he asked.

He looked relieved. “You were caught in a nightmare, Rhi. I had a really hard time getting you out. Even after I banished the wraith, the nightmare continued. You were so confused and wanted to stay. I barely got you out before the nightmare imploded.”

He kissed me fiercely, stealing the remainder of my breath away. “Oh, Rhi, it’s not your fault. Wraiths will attack anyone. You would have to be extremely well shielded to protect your mind from their powers. I guess it’s time for you to learn.”

Want to read more?  Check out Amazon, Barnes & Noble, Kobo or Smashwords and get your copy for $3.99!

Thanks for stopping by and checking out Brea's work, hope you enjoyed!
Elaina