We met Beth last week as she shared her musical inspiration.  Today she gives you a sexy peek at that story.  Hope you enjoy! 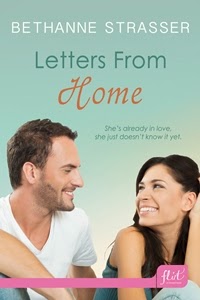 An Army doctor, Lena Rodriguez has always been too busy with school or the Army for romance. But the letters she received during deployment have captured her heart. Back home for the holidays, she awaits Christmas morning to meet the man who has turned her life upside down.

When Zack Benson watched his best friend’s sister, Lena, leave for Afghanistan, he knew he had to tell her he loved her. So he sent her anonymous love letters. Now that she’s home, he realizes he’s made a tactical error. Lena has fallen for the man in those letters but still thinks of him as a brother. He has to convince her otherwise because if he succeeds, he’ll get the best Christmas present ever. But if he fails, he could lose her for good.

The way she spoke was enough to break him, as if she knew. But she couldn’t… Mark wouldn’t have told her he’d been writing the letters. There had to be a Federal law against that, or something.
“Anyway,” she went on with a smile. “It made me think of the letters again. Think about who had written them. Someone who knows me quite well. I was always surprised by the insight in those letters, the true depth of this man’s compassion for what I was going through. He seemed to know exactly what I needed.”
Zack circled the table and approached her. He was not going to give up his surprise so close to the end of the game. He didn’t care how silly it seemed now. She wasn’t going to force his hand.
Lena took a step back, but she came up short against the counter top. “Oops.”
Zack stopped and wrapped his hands around her small waist. He felt the soft flesh under his hands and ached. “Been a crazy week, hasn’t it?”
“Mmm,” she murmured, gazing into his eyes with an openness about to bring him to his knees. “Thank you, by the way.”
He frowned. “For what?”
She shrugged. “I don’t know yet.” Then she leaned in, pressed her lips softly to his. Her arms circled him, warming him with her embrace. He let her lead, and she took him down the road of no return, coaxing his mouth open with the wet glide of her tongue.
He drew her closer with trembling hands. Every perfect curve molded against him. His hands explored her rib cage, and he found the underside of her breasts with his thumbs. He softened his touch, caressing her as the kiss went deeper and deeper. The taste of her drove him on until he had to break free in order to breathe.
“Lena,” he whispered, tracing small kisses over her lips, her cheek, and down her neck. The need for her grew, every muscle tensed with the passion of her touch. He lifted her and set her on the counter at her back.
With the last thread of sanity, he held tightly to the edge of the counter and stepped back—taking the space he needed. He was already out of breath, already so far gone. He looked into her eyes, saw the same frantic desire mirrored there.
She placed her hands gently against his skin and ran cool, competent fingers over his forearms, the touch sending shivers through him.
“I never needed anyone like I need you,” he admitted.
“How did this happen?”
He laughed. “Is it so bad, that we want each other?”
Slowly, she shook her head. “No. I never thought I had a chance with you, Zack. I—”
“What?”
“Did you write those letters?”
He shrugged, pulled the pins from her hair, and his breath caught in his throat as it spilled over his hands and covered her shoulders. He drove his hands through the thick, silky length. “I could tell you, but—”
“Then you’d have to kill me?”
He left more kisses from her ear to her shoulder. She didn’t object, merely tilted her head to one side to give him better access.
“Something like that.”

Hope you enjoyed!  Thanks for visiting!